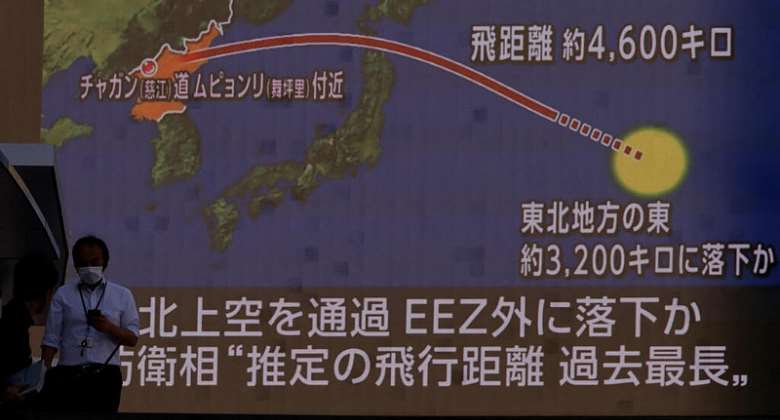 South Korean and US fighter jets carried out precision bombing drills on Tuesday, Seoul's military said, in response to the North Korean firing of an Intermediate-range ballistic missile over Japan.

North Korea fired the missile on Tuesday, with a trajectory over Japan, Seoul and Tokyo said, a significant escalation as Pyongyang ramps up its record-breaking weapons-testing blitz.

The last time North Korea fired a missile over Japan was reportedly in 2017, at the height of a period of "fire and fury" when Pyongyang's leader Kim Jong Un traded insults with then-US president Donald Trump.

South Korea's military said it had "detected one suspected medium-range ballistic missile that was launched from Mupyong-ri area of Jagang Province at around 7:23 am (22:23 GMT) today and passed over Japan in the eastern direction."

In a statement, the Joint Chiefs of Staff said the military was "maintaining a full readiness posture and closely cooperating with the United States while strengthening surveillance and vigilance".

"A ballistic missile is believed to have passed over our country and fallen in the Pacific Ocean. This is an act of violence following recent repeated launches of ballistic missiles. We strongly condemn this," Prime Minister Fumio Kishida told reporters.

The drills aimed to demonstrate the allies' "capabilities to conduct a precision strike at the origin of provocations," they added.