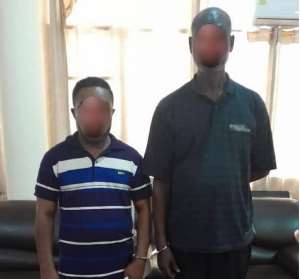 The Chief and pastor arrested by the Police in Mankessim in the Central Region for multiple murders are set to spend two additional weeks in police cells.

The two were in the company of the third suspect, Jonathan Obeng who was allegedly hired to dig the grave in which the deceased nurse was buried.

In court today, the Prosecutor, DSP Daniel Gadzo prayed the court for more time to look into the matter.

He managed to convince the court to remand the suspects into police custody while it continued with its investigations.

After listening to the lawyers of the accused as well, the Cape Coast District Court remanded the suspects to police custody for two more weeks.

They are to reappear on Tuesday, October 18.

While the pleas of the suspects were not taken, the chief, Nana Clark prayed the court to free the third suspect, Jonathan Obeng.

He confessed that the 26-year-old mason did not have knowledge about the murder of the student nurse killed in Mankessim.