How journalism got Ghanaian Judges, MPs running to declare their assets 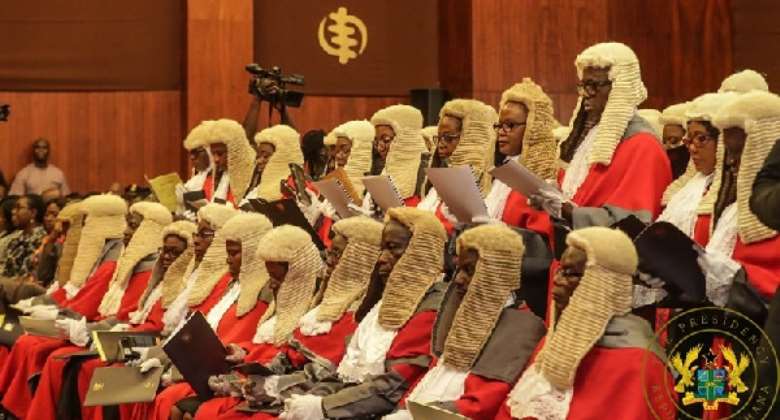 There is an ongoing scramble by justices of Ghana’s superior courts and Members of Parliament (MPs) to make known their personal worth to the Auditor General. The race to declare assets has been happening since March 2022 with the tide of accountability promising to whip many lawbreaking duty bearers into line.

Behind the panic attack is The Fourth Estate , an accountability journalism project of the Media Foundation for West Africa (MFWA). In a scrutineer project to determine the level of compliance with Ghana’s Asset Declaration Law (Act 550), it has been demanding answers.

Newshounds from The Fourth Estate, armed with Ghana’s Right to Information (RTI) Law have been peppering state institutions with questions on the extent to which their staff complies with the law. In March 2022, the Judicial Service was specifically asked to provide a list of all judges who have declared their assets in keeping with the law. This was what instigated the scramble by the law lords.

The hot run by some MPs to declare their assets also followed a similar pattern – The Fourth Estate wrote to the Audit Service in March asking to be furnished with a list of MPs who have declared their assets.

In both cases of the judges and the MPs, it would appear that an apparent bid to avoid being named and thus, shamed as defaulters, is what fueled the sprint to the Auditor General to do the needful after so many years of non-compliance.

For the judiciary, eight judges of the Superior courts took the sprint to the Auditor General to declare their assets, after The Fourth Estate had written to the Judicial Service seeking clarity on the asset-declaration status of 15 judges.

After a full list of compliant justices was supplied, The Fourth Estate did a winnowing and it quickly emerged that 8 out of the 15 judges who were compliant had only declared after the enquiry to the Audit Service by the online news platform.

In the case of the MPs, Speaker, Rt. Hon. Alban Bagbin, on May 25, 2022 issued an edict to all legislators to do the needful after The Fourth Estate had fired a letter to the Audit Service requesting to be furnished with the list of MPs compliant with the asset declaration law.

“As the saying goes, charity begins at home. As the constitutional and legal head of the institution of Parliament, the spokesperson, the arbitrator and guarantor of its authority, independence and privileges, I pledge to lead this effort by example,” the Speaker of Parliament had also promised.

Later, the Audit Service would respond with the data on May 17, 2022, showing that a number of MPs, including some leaders in Parliament, had not fully complied with the Asset Declaration Act.

The data showed that 10 out of 13 leaders of the House had violated the asset declaration laws – a classic case of lawmakers breaking the law.

However, in a subsequent scramble by the MPs, Deputy Majority Leader, Alexander Afenyo Markins, declared his assets.

Article 286 (1) of the 1992 Constitution states that “a person who holds a public office mentioned in clause (5) of this Article shall submit to the Auditor-General a written declaration of all property or assets owned by, or liabilities owed by, him whether directly or indirectly (a) within three months after the coming into force of this Constitution or before taking office, as the case may be, (b) at the end of every four years; and (b) at the end of his term of office.”

The law requires that the President, Vice-President, the Speaker of Parliament, Deputy Speakers of Parliament, members of Parliament, ministers and deputy ministers of state, ambassadors, the Chief Justice, Judges of Superior Court, Judges of Inferior court and managers of public institutions in which the state has interest submit to the Auditor-General written declarations of all property or assets owned by, or liabilities owed by them, whether directly or indirectly.

The Constitution requires the declaration to be done before the public officer takes office. However, Section 1(4)(c) of the Public Office Holders (Declaration of Assets and Disqualification) Act directs public office holders to meet this requirement “not later than six months after taking office, at the end of every four years and not later than six months at the end of his or her term.”

Law is weak and unsatisfactory to MFWA

The constitution, however, forbids public disclosure of the assets declared by the public officeholders unless demanded as evidence by a court of competent jurisdiction, a commission of inquiry appointed under Article 278 or before an investigator appointed by the Commissioner for Human Rights and Administrative Justice (CHRAJ).

The declaration, per the law, is to be done in secret to the Auditor General.

This secrecy permitted by the law has been the source of a long-running debate with those in support of declaring assets in secret arguing that it saves public officeholders from unnecessarily exposing details about their wealth to potential criminals who can use the information they provide to rob them.

However, those who kick against the shrouding of asset declaration in secrecy, including the MFWA, point out that asset declaration is a requirement for public, and not private officeholders, and therefore, anybody aspiring to hold public office should be prepared to tell the public what they own.