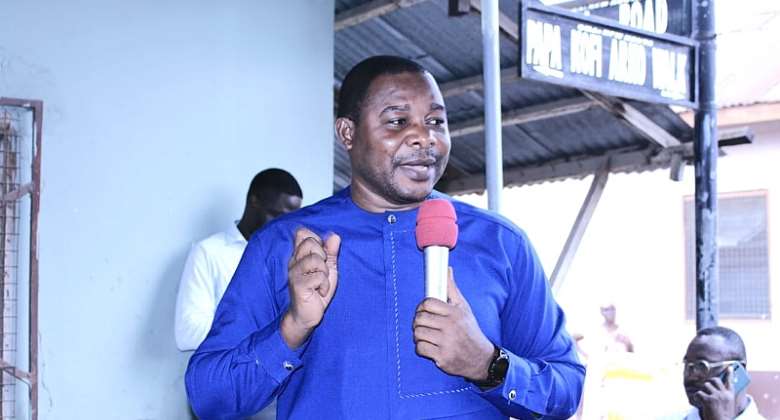 The Municipal Chief Executive for Obuasi, Honorable Elijah Adansi-Bonah has vehemently refuted claims by a section of Persons with Disability in Obuasi that he has handed over the training and rehabilitation centre for PWDs in Obuasi to the Ghana Education Service (GES).

Members of the Obuasi branch of the Ghana Federation of Disability has recently held a press conference claiming that the Obuasi Municipal Assembly has handed over the training and rehabilitation center which was completed by AngloGold Ashanti to the GES contrary to earlier arrangements.

Speaking at a community durbar in New Nsuta, a suburb of Obuasi, the Obuasi MCE said the facility which was completed in September 2021 is yet to be operationalised due to lack of teachers.

The Assembly however set up a committee to recommend the best and more prudent way to run the facility. He added that the committee after further deliberations recommended to the Assembly to write to the Ghana Education Service to request for teachers to be posted to the school.

Hon.Adansi- Bonah also talked about encroachment on the main road linking the Central Market by traders. Whiles stating that such activities pose danger to the traders, the MCE said it has the potential of damaging the recently constructed road.

The community engagement which has been lined up by the Assembly forms part of the Assembly's quest to deepen decentralisation by encouraging participatory governance. It is a fellow up to a town hall meeting organised by the Assembly last month.

The engagement so far has given the MCE and other Heads of Department a welcoming opportunity to brief the people on the programmes and activities of the Assembly.

Topics discussed throughout the tour included; the importance of acquiring a building permit and the processes involved, sanitation issues, security and agriculture.

The Municipal Police Commander Chief Supt Elizabeth Obenewaa Viney appealed to the public to report the activities of unscrupulous people to the police. She said her office is always open for informants to relay such information to the Police. She assured informants that the police will always protect their identity.

Participants were given the platform to put forth their grievances.