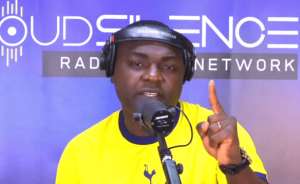 The ferocious broadcaster claimed that the NPP youths who are always found defending government on Twitter are the reason their old ‘fools’ has no respect for Ghanaian youths.

He explained in a tweet spotted by Modernghana News that instead of them rebuking their leaders, they blindly defend them.

According to Kevin Taylor, this attitude has made the leaders of the ruling party take the youth for a fool.

“NPP youth who are on Twitter foolishly defending this clueless government are the reason the old NPP fools call the youth of Ghana tuber of yam,” his tweet reads.

After the President was booed by some youth at the Independence Square during the Global Citizens festival on Saturday, September 24, Adansi-Asokwa MP Kobina Tahir Hammond, chastised the hooters for their actions.

At a press conference, he said, “Let’s exercise restraint a little. Akufo-Addo is the executive President overseeing all the affairs of the country. When he arrived on the stage, he didn’t say anything untoward.

“Besides, it wasn’t even a political platform. He was only expressing his satisfaction with the event”, he said.

The MP NPP continued, “We will continue to admonish you the young men and women to be patient. When there’s an issue to be addressed, society always consults the elderly. Not you the young ones, whose heads are like coconuts."