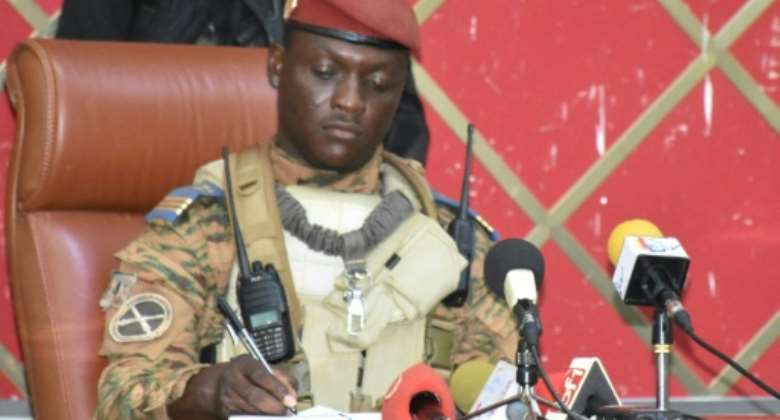 Calm returned to Burkina Faso's capital on Monday after the country's military leader fled to neighbouring Togo following the second coup in less than nine months.

The streets of Ouagadougou were quiet after a two-day standoff between junta chief Lieutenant-Colonel Paul-Henri Sandaogo Damiba and a newly-emerged rival for power, 34-year-old Captain Ibrahim Traore.

After a jittery weekend that also saw violent protests at the French embassy and culture centre, Damiba agreed on Sunday to step down.

Diplomats said Damiba had gone to the Togolese capital Lome, and this was confirmed on Monday by the Togolese government, which said it had accepted him in order to support "peace in the sub-region."

West Africa's regional bloc ECOWAS issued a statement late Sunday welcoming "a peaceful settlement of... differences" and announced it would dispatch a delegation to Ouagadougou the following day.

But sources at the Burkina foreign ministry and president's office said the mission had been postponed until Tuesday, while an ECOWAS diplomat said the delay was because of "logistical reasons."

Protest aftermath: The damaged entrance to the French embassy in Ouagadougou. By Olympia DE MAISMONT (AFP)

Burkina is struggling with a seven-year-old jihadist campaign that has claimed thousands of lives, forced nearly two million people to flee their homes and left more than a third of the country outside government control.

Appointing himself transitional president, Damiba vowed to make security the country's top priority but after a brief lull the attacks revived, claiming hundreds of lives.

Traore dramatically emerged on Friday at the head of a faction of disgruntled junior officers, which proclaimed that Damiba had been deposed -- also for failing to roll back the insurgency.

Damiba set "seven conditions" for stepping down, according to religious and community leaders who mediated in his standoff with Traore.

These included safety guarantees for him and his allies in the military, and that a pledge he had given to ECOWAS for a return to civilian rule within two years be respected.

Speaking on the French radio station RFI on Monday, Traore vowed to uphold the July 2024 timeline for restoring civilian rule.

This could even happen "before that date" if conditions were right, Traore said.

He said that he would simply carry out "day-to-day business" until a new civilian or military transitional president was appointed.

The appointment would be made by a national forum gathering political and social representatives, the pro-Traore faction in the military said on Sunday.

Traore told RFI that this meeting would take place "well before the end of the year."

Analysts said that his position, if carried out, would be acceptable to ECOWAS.

The Economic Community of West African States was created to shore up democracy in one of the world's most volatile regions, yet has suffered five coups in three of its 15 members since August 2020.

Burkina's latest bout of turmoil coincided with a surge of violent protests against France, the former colonial power and ally in its struggle against the jihadists.

Pro-Traore officers accused Damiba of having taken refuge at a French military base near Ouagadougou in order to plot a "counter-offensive" -- charges he and France denied.

On Sunday, security forces fired tear gas from inside the French embassy to disperse angry protesters, and the French Institute, which promotes French culture, was also attacked.

Pro-Moscow: Demonstrators waving a Russian flag stand atop a UN peacekeepers' vehicle in Ouagadougou on Sunday. By - (AFP)

The foreign ministry in Paris blamed the violence on "hostile demonstrators manipulated by a disinformation campaign against us."

Traore on Monday condemned what he called "acts of violence and vandalism" against those buildings and urged "calm and restraint."

Damiba's ouster was proclaimed on Friday just hours after a protest rally that also demanded the end of France's military presence in the Sahel and closer military cooperation with Russia. Some of the demonstrators waved Russian flags.

Russian paramilitaries are supporting fragile regimes in Mali and Central African Republic, sidelining France, those countries' traditional backer. The Russians have also been tarred with accusations of massacres and other abuses.