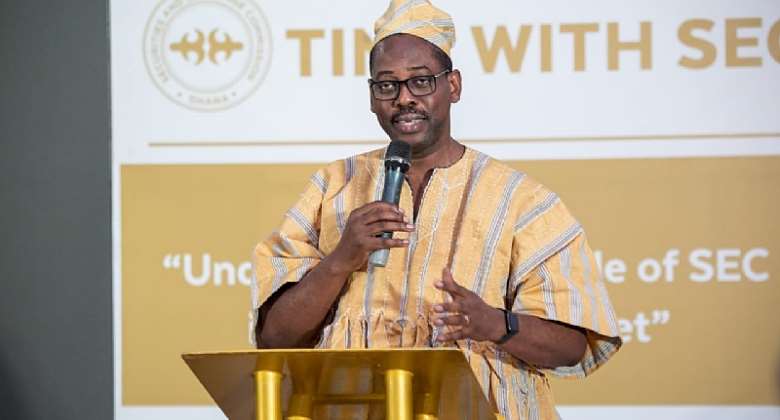 The program which is a flagship initiative of the SEC forms part of the SEC’s strategic thrust of educating members of the investing public and other key stakeholders about SEC, the Ghanaian Capital Market, and other important investment topics.

The theme for the event was "Understanding the Role of SEC in the Capital Market" and it featured topics such as how to make use of the Capital Market (buying shares, collective investments schemes, and capital raising); and how to identify Ponzi or Pyramid Schemes.

The event was also used by the SEC to provide the latest information on the government bailout program as well as share other updates in the securities industry. There was also an engaging open forum which provided the investing public with an opportunity to ask questions and make their issues known directly to the SEC.

In a welcoming remark, Naa Yab Gulkpe, Alhaji Naa Alhassan, Paramount Chief of Tamale and Chairman of the program whose speech was read on his behalf thanked the Securities and Exchange Commission for organising its flagship program in the Northern Region.

According to Naa Yab Gulkpe, the capital market is of utmost significance to growing economies since such economies need new forms of financial intermediation to finance investments that are either too long term or too risky for commercial banks to venture into.

“Such long-term financing makes the capital market an important driver for spurring economic growth and innovation,” he said.

He further noted that the high level of ignorance among the investing public is a challenge that must be tackled because in many cases people who fall victim to fraudulent investment schemes are not well informed about investment and capital market activities.

“I, therefore, applaud the Securities and Exchange Commission once again for looking beyond the national capital for this outreach program,” he added.

The Northern Regional Minister, Hon. Alhaji Shani Alhassan Saidu, in his remarks, stated that the capital market is a very important part of Ghana’s financial industry since it brings together suppliers of capital and those who seek it for varied purposes. He noted that the Northern part of Ghana encompasses various opportunities that need to be harnessed and leveraged to unearth massive benefits to the country.

He however added that “these opportunities require ‘patient capital’ to make them a reality and the capital market holds the key to unlock such patient capital.”

Additional remarks were also made by the Director-General (DG) of the SEC, Rev. Daniel Ogbarmey Tetteh, who explained the rationale for the program. According to Rev. Ogbarmey Tetteh, “the TIME WITH THE SEC is to demystify the capital market and help members of the investing public and the public better understand what the industry is all about, and the products in the industry to facilitate their meaningful and well-informed participation in the market,” he said.

He pointed out significant steps that had been taken to strengthen the Securities Industry including issuing important Guidelines for Market Operators such as the Corporate Governance Code for Listed Companies 2020 (SEC/CD/001/10/2020) and Securities Industry (Conduct Of Business) Guidelines 2020 (SEC/GUI/004/10/2020); the introduction of more stringent licensing requirements; the launch of a 10-year Capital Market Master Plan to serve as a blueprint for the growth and development of the Ghanaian Capital Market; the implementation of a nationwide investor education program; and close up collaboration with Law Enforcement Agencies (LEA) such as the Economic and Organised Crime Office (EOCO) and Criminal Investigation Department (CID) of the Ghana Police Service.

Other dignitaries who graced the occasion with their presence include Mrs. Deborah Mawuse Agyemfra, Deputy Director-General Legal of the SEC; Mr. Paul Ababio, Deputy Director-General Finance of the SEC; Mrs. Tucci Goka Ivowi, Chief Executive Officer of the Ghana Commodity Exchange (GCX); Mr. Robert Owoo, Chief Operating Officer, GCX; Directors and Heads of Departments at the SEC; and representatives from Ministry of Food and Agriculture, EOCO, GCB Capital Limited, Office of the Registrar of Companies (ORC), and Peer Regulators in Ghana’s financial sector.