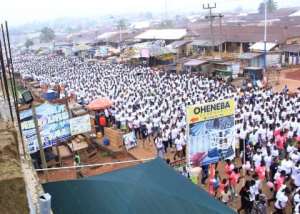 The 10th edition of 'Ghana Walk for the Cure' was held at Tepa in the Ahafo Ano West district of the Ashanti region in a colourful display.

The event held annually by Breast Care International (BCI) to raise campaign awareness about breast cancer was the first to be organized in a district since its inception in 2011.

The international event, on the theme “Breast Cancer Won’t Rest, So Why Should We Rest” was held on Saturday, October 1, 2022.

Dr Mrs Beatrice Wiafe Addai, who is also the CEO of Peace and Love hospitals, stated that more than 2,000 women died out of 4,600 cases of breast cancer recorded annually in Ghana.

Declaring it a national disaster, she posited that the disease should be given the much needed attention just as COVID-19 that killed more than 1,400 persons in two years.

“If breast cancer is saying it won’t rest, why should we rest? Everyone must support BCI as we wage war against the disease to protect our women,” Ghana NCD Alliance chair urged.

She was quick to add that the war can be won if breast cancer education is intensified in the rural areas where the disease is rampant.

Dr Mrs Beatrice Wiafe Addai assured that “the disease is preventable, treatable, curable and if reported to the hospital early, there is a high chance of survival”.

The Paramount Chief of Tepa Traditional Council, Nana Adusei Atwenewaa Ampem I, in his speech called for government’s support for BCI as it wages war against breast cancer.

As a national disaster, the paramount chief said “it needs conscious efforts to save and reduce breast cancer deaths among women in Ghana”.

The Moroccan Ambassador to Ghana, H.E. Iamane Quaadi, expressed her happiness for being part of an international event that seeks the interests of women in Ghana and Africa.

She pledged the Moroccan Embassy's support to Dr Mrs Wiafe Addai and her BCI team in the fight against breast cancer in Ghana.