It's never true politicians must be loud, aggressive and abusive; It's an unchecked trait — Kwabena Agyei Agyepong 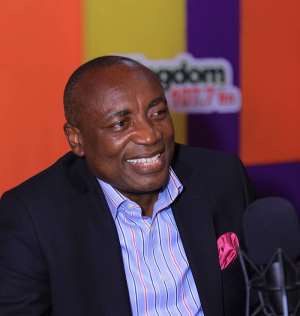 Kwabena Agyei Agyepong, a former General Secretary of the ruling New Patriotic Party has expressed displeasure over what he calls the ‘continuous politics of insults’ amongst most political parties that is fast gaining acceptance in Ghana’s political landscape.

He asked members of political parties and the media in Ghana to desist from the culture of insults since it was gradually ruining the peace of the country.

He said the act only incited rage and dented the image of the country’s budding peaceful nature.

Kwabena Agyei Agyepong was speaking with Fiifi Pratt on Accra-based Kingdom FM 107.7 in which he said, “Our politicians must stay away from the politics of insults they engage in on various media platforms. Such acts can trigger violence and land us in an unpleasant state we never wished for.”

He added, “Let us do away with hateful speech and intolerance, that can cause rage and germinate into an uncontrollable situation and rather focus on building a peaceful Ghana we will all love to live in.

"We need to stop this trend now. It is a dent on the democracy which we pride ourselves in as the most peaceful on the continent. Our political parties must stick to issues and argue their points respectably.

"It is never true that politicians must be loud, aggressive and abusive. It is an unchecked trait that becomes a norm and it is possible to change it and run clean campaigns."

According to him, political actors continue to trade insults during every political campaign thus, denting the country’s democratic principles.

Kwabena Agyei Agyepong called on the regulatory body to institute punitive measures for media outlets that failed to comply with acceptable standards.

He said the media must lift up their game to a more responsible role of educating, informing and responding to concerns of the citizenry.

"Now, in Ghana, to be a successful politician is to read the archives and know in detail who said what, where and did what, when, spice it up with some semantics which when broken down amount to insults. It’s about time we shifted from the practice of just reviewing papers to discussing issues that bother on the socio-economic development of our communities and promote peace for sustainable growth.

"The setting up of decency standards by all media houses, that seeks to check hosts/hostess and their panel members, is needed. Individuals and organizations must be sanctioned and if possible blacklisted from appearing on the sets anytime they flout the decency standards. The Media is the salvation of our ears and they must show the way, "Kwabena Agyei Agyepong said.