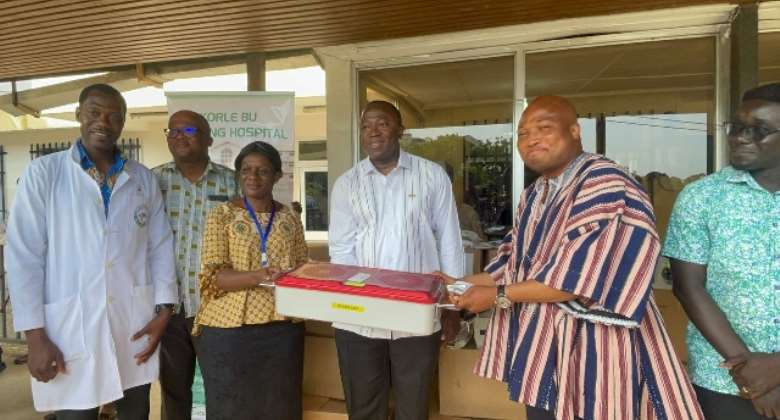 The Member of Parliament (MP) for North Tongu, Samuel Okudzeto Ablakwa, has made a donation of medical equipment to the neurosurgery unit at the Korle-Bu Teaching Hospital.

The donation, made on Friday, September 30, 2022, follows similar benevolence the MP has previously shown to the Saint Anne Catholic Polyclinic in Tagadzi of the North Tongu Constituency and the Volta Regional Hospital in Ho to augment healthcare delivery to his constituents.

Upon realising holistic healthcare goes beyond medical facilities in his district, Mr Ablakwa extended his donation tradition to the Korle-Bu Teaching Hospital in the Greater Accra Region.

“I believe in integrated solutions. Whatever you do, you must recognise that there will be complicated cases; there will be special cases that will require a referral and if you think that you are an island and you are okay, when those moments arise, you will be found wanting,” he said.

The lawmaker also mentioned an international partner which aids in these efforts.

“So, in putting the package together, we said that – why not take advantage of this network we have established with our partners in the United State of America, an institution called Suppliers Overseas, who we spoke to and signed an MOU with and have agreed to partner them. So, we only made a contribution which is just about 20% of the actual cost if we were to pay fully. And, so, we said that instead of being myopic or narrow minded, why not ensure that you have full advantage and full impact across the entire spectrum?” he explained.

Mr Ablakwa furthered pointed out his team liaised with the leadership of the neurosurgery unit at Korle-Bu to determine the exact needs of the facility in order not to create a white elephant; that is, donate equipment that will not be needed by the facility.

Expressing appreciation, the Chief Executive Officer (CEO) of the Korle-Bu Teaching Hospital, Dr Opoku Ware Ampomah, said the hospital has many logistical challenges hence donations such as Mr Ablakwa’s go a long way to addressing some of the shortfalls in the facility. He also appealed to all who are capable to emulate the gesture of the North Tongu MP.

“This is somebody who has put his mouth where it matters – in the sense that he has taken a step and he is contributing to making a difference. So, those of you watching us and those corporate entities, what are you doing?” he challenged.

“We know that this is not the only place he is supporting but so many other interventions he is doing as an individual MP and I believe that it is a very good example that others should emulate,” Dr Ampomah added.

The head of neurosurgery at the Korle-Bu Teaching Hospital, Dr Hadi Mohammed Abdallah, could not hide his joy as he noted it was probably his first time seeing some of the equipment donated.

He bemoaned also that the Korle-Bu Teaching Hospital, arguably, has the best brains in the sub-region but is bedeviled by logistical shortfall.

“When things like these are donated, it makes a big difference,” Dr Abdallah noted.

“What you see here is Aneurism Set for those who could easily bleed in the brain from an abnormal cell in the brain and I can tell you that such surgery is not done in any part of West Africa, but, we have experts here who can do this. This is really a surprise to me because he [MP Ablakwa] didn’t mention it to me,” Dr Abdallah continued.

The Korle-Bu Teachoing Hospital was established on Monday, October 9, 1923, and the hospital has grown from an initial 200 bed capacity to over 2,000.

It is currently the third largest hospital in Africa and the leading national referral centre in Ghana.

It has over the years been faced with many logistical challenges and over congestion.

The congestion, the CEO of the hospital explained, is as a result of the low cost the facility charges the public for its services as many of the services the facility renders are very expensive in other hospitals.

Your plan to buy oil with gold instead of USD bogus; you're ...
36 minutes ago