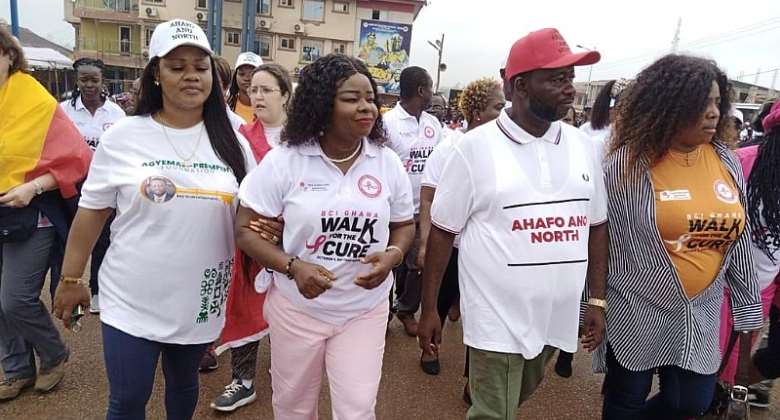 She said higher cases of the deadly disease, which had no known causes, were being reported worldwide, and explained that, “it is not only Ghanaian women who develop breast cancer so forget about people's opinions and myths on it having spiritual links, the disease has no connection with spirituality.”

According to her, cancers were the number one killer diseases among women, calling on the people to stop hiding in their rooms, wasting time at prayer camps and unapproved treatment centers to tackle breast cancer head on.

Every year more than 2000 Ghanaian women die from breast cancer out of the 4000 diagnosis.

This represents close to 50 per cent of women dying needlessly from this disease.

She was speaking at the 10th Edition of BCI Ghana Walk for the Cure at Tepa in Ahafo-Ano North Municipal Municipality.

This year's walk through the principal streets of Tepa attracted thousands of prominent personalities, students, and other individuals.

It was themed “Breast Cancer Won't Rest, So Why Should We.”

Dr. Wiafe Addai, who is also the CEO of Peace and Love Hospitals indicated that breast cancer does not stay in the breast alone, it spreads to other organs including lungs, brain, liver, and bone if not treated early, adding that the best thing to do was to adopt secondary prevention – early detection and prompt action.

The deadly nature of breast cancers was why the BCI and the Peace and Love Hospitals have waged a war against the ailment in Ghana and the African sub region.

She appealed for support from stakeholders to create awareness and education to conquer as well as reduce the number of people dying from the curable disease.

Nana Adusei Atwenewaa Ampem I, Tepamanhene, who hosted the programme said the health of the people was paramount and issues of breast cancer should be taken seriously, citing the devastating consequences of the disease.

He said the government should have further discourse and roll out programmes to assist the BCI in reducing breast cancer deaths.

The Tepamanhene pledged to allocate land for BCI to build a breast care facility in the area to help women seek early treatment and promote their well-being.

Madam Martina Appiah-Nyantakyi, Municipal Chief Executive, Ahafo-Ano North, reiterated that the consequences of the disease were dire, and called for women to seek early treatment to save lives.

Inflation will remain high till the end of first quarter of ...
35 minutes ago