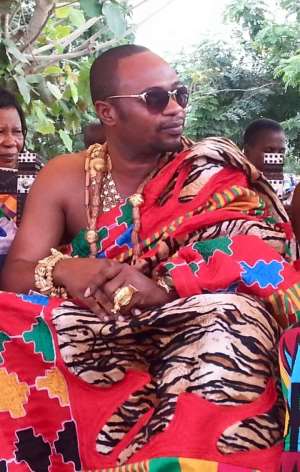 Omanhene of the Gomoa Ajumako Traditional Area, Obrempong Nyanful Krampah XI has called on law enforcement agencies to impose tougher punishment on encroachers on Gomoa lands before it becomes a security issue.

According to Omanhene, if immediate action is not taken, it may lead to communal clashes.

He has therefore called on the Member of Parliament for Gomoa Central Hon Naana Eyiah and the DCE Hon Benjamin Kojo Otoo and Minister for National Security to as matter of urgency take immediate action to stop people or groups of people encroaching on Gomoa lands.

He specifically mentioned the Effutu Municipal Assembly which he said was operating beyond its boundaries.

"If care is not taken, we (Gomoa people) may be compelled to protect our lands by any means necessary, because we won't allow 'foreigners' to take over the lands our forefathers fought for us with their blood just to be taken away from us.

"We have every document covering all the lands in Gomoa and have submitted same to the Lands Commission at Cape Coast to authenticate our claims," he stated.

Obrempong Nyanful Krampah XI expressed concern over a recent demolition of over 20 structures including homes undertaken by the Effutu Municipal Assembly at a location that falls within the jurisdiction of the Gomoa Central District Assembly. "We are patiently waiting for the Regional Minister Hon Mrs Justina Marigold Assan to tell us something that may solve the issues at hand."

The Gomoa Ajumako Omanhene used the occasion to call on Ghanaians to cherish their culture and tradition adding that "our present woes were mostly from the adoption of foreign cultures which are alien to the black race.

"We are Africans and for that matter have our own Culture and Traditions which we ought to cherish it. It is sad Africans recognize foreign culture leading to indiscipline among the youth.

"Our forefathers through our culture and Traditions thought us to live peacefully with one another, but today even some Church members have grudges among themselves.

"Our culture and traditions are not fetish as people blindly want everybody to believe. It is a God-sent to the black race. We shouldn't forget our culture and Traditions.

"I want to call on Nananom to sensitize their people on the need for them to sustain and practice our culture and traditions as our way of life as Ghanaians. The food we eat, our kind of dresses and actions should portray to the world the beauty of Ghanaian culture," he noted.

The Gomoa Ajumako Omanhene urged Nananom, Assembly Members and stakeholders to assist with the implementation of bye-laws on education to reduce the rather high level of teenage pregnancies in Gomoa.

He cautioned Nananom against involvement of children in any of their planned programmes and activities for any festivities especially during school hours threatening to sanction any chief caught engaging in such activities.

"As for our deplorable roads, the least said about it the better because Government is virtually refusing to listen to our plight of hardships commuters who ply the roads to make ends meet," he lamented.

Concerning the boundary impasse between the Effutu and Gomoa, the DCE to Gomoa Central Hon Benjamin Kojo Otoo told Nananom, the Central Regional Minister, Hon Mrs Justina Marigold Assan has taken over the case and has accordingly set up a committee to find a lasting solution to the case adding that the Gomoa Central District Assembly has submitted relevant documents to the Regional Minister.

"Nananom, as I speak the Effutu Municipal Assembly is yet to submit a single document to back their claim. It is unfortunate."

Being an MP is serious business; the responsibility of a Min...
49 minutes ago