From Pro-Poor President to Liar-Man President: A Birthday Tribute to Mr. Weah 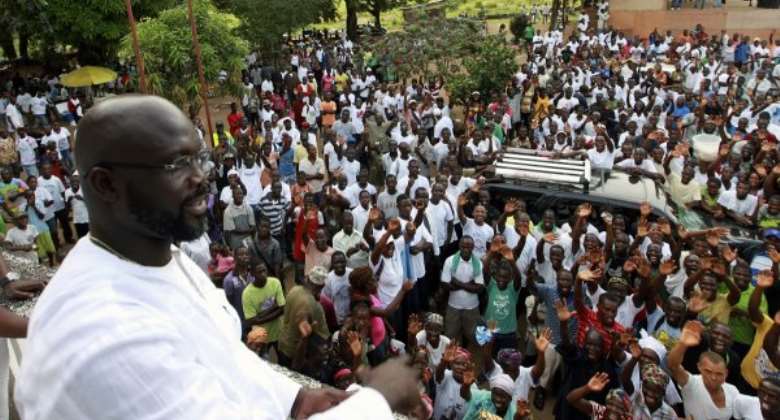 Never have the people waver the courage, determination, and boldness to struggle for dignity and honor in their conditions and existences. The people have stood firm against destitution, poverty, injustice, and inequality in history. It is this determination and courage of the people for betterment in their existential conditions that have led to transitional exercises in our country and around the world. We must state here resoundingly that the ascendency of president Weah to the highest office of Africa’s first independent state is as the result of the people’s collective determination and will-power to strive for betterment and improvement in their lives. President Weah and his bandwagon of senseless buccaneers must never think otherwise. To do so is to masquerade in juvenile naivety.

As the people get worsened and consumed in the Weah’s failed state that is characterized by poor administrative governance and growing poverty, Weah has planned a birthday jamboree for himself with total disregard of the conditions of our people are confronted with. We will not allow this same man to have grace on his birth anniversary without us highlighting the humiliation and hardship his leadership has casted on the nation. As today marks the birth anniversary of president Weah, we are using the occasion to address the pro-poor president turned liar-man president whose years of reign in leadership has been saturated with lies, mendacity and falsehood.

In December 28, 2017, pressed with the urging need for a redemptive leader to deliver them from the shackles of economic paralysis and administrative decadence, the Liberian people demonstrated democratic audaciousness by overwhelmingly casting their political lot with the Coalition for Democratic Change (CDC) that president Weah represents. The boldness of the Liberian people was shown in their votes as they put the CDC in a staggering lead of 61.5 percent in a 1.2m voters turn up. This loudly expressed democratic decision of the Liberian people audibly and noticeably show to the world how determined the people were to seek alternative measures in their conditions as they felt betrayed and deceived by the Unity Party that spited doomful indignation and shameful existence on them.

The country received a wave of cheerful and joyful atmospheric ambience as the fabric of the country were eclipsed with resounding jubilation on the change of leadership that the people considered as an alternative front that could redeem them from the misrule and administrative feculence the Unity Party condemned and relegated them to. The happiness and cheerfulness of the Liberian masses fast spread across the country. The slum dwellers, who saw the newly elected president as one of their kind, thought the transitional change was a God sent opportunity to provide them empowering opportunities to foster transformative change in their lives.

The masses of the shantytowns led the charge to spread the cheerful affection of the change in leadership across the country. From the urban quarters to the rural quarters, the people became optimistic of a fresh journey as the impulses of their expectations were hammering. The masses felt assured of the coming of a liberator and an emancipator as they confidently paraded the corridors of history with joy and happiness to express the dawn of a new beginning in their lives.

In the midst of the national excitement and joyful exuberance of the people, the Unity Party was finally retired on January 22, 2018, as power was transmitted to the Coalition for Democratic Change of which president weah is the face. A peaceful transition that hasn’t been experience in Liberia for 73years was now a conversation of history as the moment became an included page in the historical accounts of our country’s history. President weah took to the podium of a cheerfully crowded SKD to deliver his inaugural address as the Liberian masses were desperately eager to hear him out.

The people saw him as a redeemer; they believed in everything he brought forth as an alternative package to change their conditions of poverty, indignation, mendicancy, injustice, and inequality. As the masses were electrified with the hopeful sensation of change, president weah used the moment to submit to the Liberian people a thunderous commitment to make corruption a public enemy and also went ahead to present dozens of promises. This was a moment of national relieve to a people who have suffered humiliation and indignation behind the rusty shackles of misrule and paralysis.

The official inauguration of president weah as the 24th president of the republic marked the end of the part of the people, it was now the time and moment of the pro-poor president to do his part. As the people saw themselves in him, the people became more optimistic as the official policy of governance became the PRO-POOR ANGENDA FOR PROSPERITY AND DEVELOPMENT. Sadly, hopes were to be devastated and expectations were to be frustrated soon the ball began to roll. In less than a year in national governance, the man who the people have preferred to alter their conditions had started on a dangerous beginning by engaging in wanton looting of the state treasury and expressing empty promises in every corridor of the state. While the president was reaching out everywhere making unrealistic promises, the government was massively suffocating from corruption as US$25 MILLION and L$16 BILLION couldn’t be accounted for. The nation started to suffer the Weah’s misrule as economic hardship and limitless suffering befell the people. In the midst of all these catastrophic administrative paralysis, president Weah and top officials of his government started owning condominiums and palaces that weren’t parallel to their accumulative worth.

Empty promises that are wrapped in polished rhetoric became the tools use to camouflage the looting and stealing of the criminal bureaucrats of the Weah’s leadership. The president being part and parcel of the criminal maneuverings couldn’t lawfully punished the involved elements but shield them in protection as Min. Tweah and others freely peddle around while cases of corruption are hanging over them. The president who vouched to make corruption a public enemy ended up befriending corruption. The president that was once cheered as pro-poor president was now losing value and essence in the eyes of the people as he has massively failed on his promises to the people. Is president Weah a pro-poor president or a liar-man president? The later will be preferable for any sound and conscious mind.

In flagrant dishonor of the expectation, anticipation, and expectancy of the people, president Weah went ahead to make 169 promises from 2018 to 2021 according to NAYMOTE PRESIDENT METER PROJECT REPORT. The report shows that out 169 promises, only 11 were completed, constituting (7%) of all the promises during the reporting period. Additional 65 promises (38%) are on ground breaking rhetoric; and 93 promises (55%) have not started and left in abandonment. For almost 6years in government, these promises are left unfulfilled as the Weah’s government preferred polished rhetoric to seduce the people into their package of deceptive lies and falsities. Is president Weah a pro-poor president or a liar-man president? The later will surely be an optional preference.

For the records, we must say here that our intention to address president Weah on today isn’t to wish him birthday compliments neither to dignify him, but to use the occasion to remind him the liar-man president he has become in 5 years period in national leadership.

We want to inform president weah as he celebrate his birthday in grandiosity and opulence that the people are still waiting with high patience on the final fulfillment of the following promises:

4. Construction of a Hospital in Voinjama, Lofa County

7. Rehabilitation of the Gorblee City Sport Field under the Presidential priority project

9. Renovation of the Sport Pitch in Compound #1, District #1, Grand Bassa County under the Presidential Priority Projects

10. Construction of a Youth Center in Weala, Margibi County

13. Complete and furnish with Computers a Youth Resource Center in Foya, Lofa Count

15. The construction of the coastal highway

16. The construction of a modern city on bali island

18. The sourcing of ETON and EBOMAF Loans

19. The fall in prices of basic commodities; just to name few of the many promises

As these promises overwhelm president weah, he reverts to a liar-man character as he goes on public platforms to amuse himself with polished rhetoric to camouflage his failure to not deliver on these promises. His recent liar-man character was seen on a widely circulated video on the social media where he compered a faulty city like Monrovia to Miami, a city in the USA. President Weah must be aware that the people aren’t cannon fodders. The people are conscious beings with firm resilience and sound upbringing that have never waver the courage to seek betterment in their lives. Like all other hegemonies, the Weah hegemony can be assured that the Weah hegemony will take the retirement seat and history will take it course.

About the author: Mohammed S Jalloh is a student studying economics at the University of Liberia and a staunch militant of Student Unification Party where he actively serves as the Chairman on the Bureau of Propaganda, Research, and Guidance. He can be reached at [email protected]