By Olympia de Maismont with Pierre Donadieu in Abidjan
France 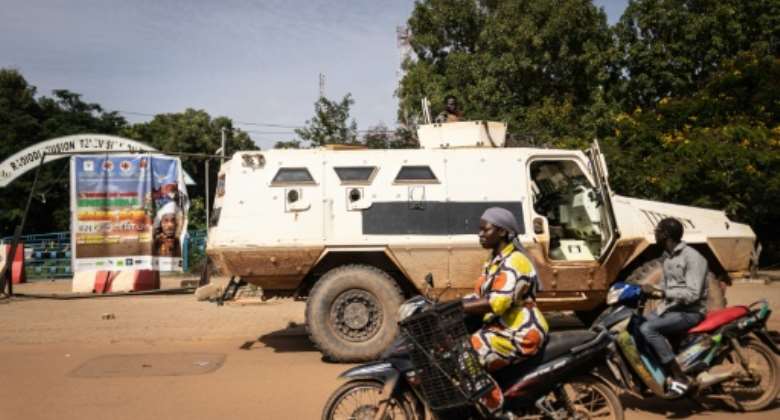 A military vehicle sits outside the Burkina Faso national television offices in Ouagadougou on Saturday. By OLYMPIA DE MAISMONT (AFP)

The army officers who have seized power in Burkina Faso said in televised comments on Saturday that toppled junta leader Paul-Henri Sandaogo Damiba was planning a counteroffensive from a "French base".

Damiba "is believed to have taken refuge in the French base at Kamboinsin in order to plan a counter-offensive to stir up trouble in our defence and security forces," they said in a statement read out on national television and signed by Captain Ibrahim Traore, the country's new strongman.

An hour before the televised comments by the military figures, who overthrew Damiba on Friday, the French embassy issued a statement "firmly denying any involvement of the French army in the events of the last few hours".

The embassy also denied "rumours that Burkinabe authorities have been hosted or are under the protection of French military".

UN Secretary General Antonio Guterres "strongly condemns any attempt to seize power by the force of arms and calls on all actors to refrain from violence and seek dialogue," his spokesman said in a statement Saturday.

Damiba himself came to power in a coup in January.

He had installed himself as leader of the country of 16 million after accusing elected president Roch Marc Christian Kabore of failing to beat back jihadist fighters.

According to the new Burkina putschists, the actions by Damiba and the French forces are in response to their willingness "to go to other partners ready to help in the fight against terrorism".

France has a military presence in Burkina Faso, with a contingent of special forces based in Kamboinsin which is some 30 kilometres (19 miles) from the capital Ouagadougou.

The situation in Ouagadougou was tense on Saturday, with gunfire and the deployment of soldiers in the streets, raising fears of clashes between Damiba's supporters and the country's new strongmen.

The European Union and the African Union added their voices to a chorus of global condemnation of the second coup this year in the deeply poor and restive West African country.

"The chairperson calls upon the military to immediately and totally refrain from any acts of violence or threats to the civilian population, civil liberties, human rights," the AU said in a statement, calling for the restoration of the constitutional order by July 2024.

The junior officers who toppled Damiba on Friday said he had failed to fight jihadist attacks in the country.

The European Union warned that the latest coup put in danger efforts undertaken to restore constitutional order by July 1, 2024 and called for the new authorities to respect previous agreements.

"The European Union also deplores the degradation of the security and humanitarian situation in the country," the bloc's foreign policy chief Josep Borrell said in a statement.

The Economic Community of West African States regional bloc "condemned in the strongest possible terms" the latest seizure of power, calling it "inappropriate."

On Friday, pre-dawn gunfire erupted in the dusty and spread-out capital around the presidential palace and culminated in the latest coup.

More than 40 percent of the country remains outside government control.

The new leaders swiftly suspended the constitution, sealed the borders, dissolved the transitional government and legislative assembly and instituted a 9:00 pm to 5:00 am curfew.