Is the money you said we are sitting on suddenly not enough to tackle our economic misery – Prof. Gyampo asks Akuf-Addo 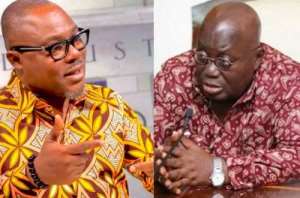 Senior Political Science Lecturer at the University of Ghana, Legon, Prof. Ransford Gyampo has slammed the management style of President Akufo-Addo’s government in addressing the hardship being faced by Ghanaians.

Recalling how the President told Ghanaians during his campaign that there is enough money in the country in his famous “y3 te sika so” statement, Prof. Gyampo is asking what has happened to the money.

In a post on his Facebook page, the Political Science Lecturer opined that President Akufo-Addo’s tenure as President has brought about the most hardship since 1983.

“President Akufo Addo, you said “y3 te sika so nanso okom de y3n.” We were confident you were gonna address this. But your tenure has witnessed the worst of hardships and mentally retarded inflation almost next to what happened in 1983,” Prof. Gyampo posted on his social media page today.

The UG Lecturer added, “Is the money we are sitting on, suddenly not enough to tackle our economic miserization? Did the President lie that “y3 te sika so? Covid and Ukraine-Russian conflict, cannot affect us more than the rest of Africa.

In the midst of the hardships being faced by the citizenry, Prof. Ransford Gyampo has called on government to be up and doing in its efforts to turn things around.

He notes that instead of excuses and explanations on why there is hardship, government should focus on solving the problems.

You’ve been a dependable husband – Lordina celebrates Mahama...
33 minutes ago