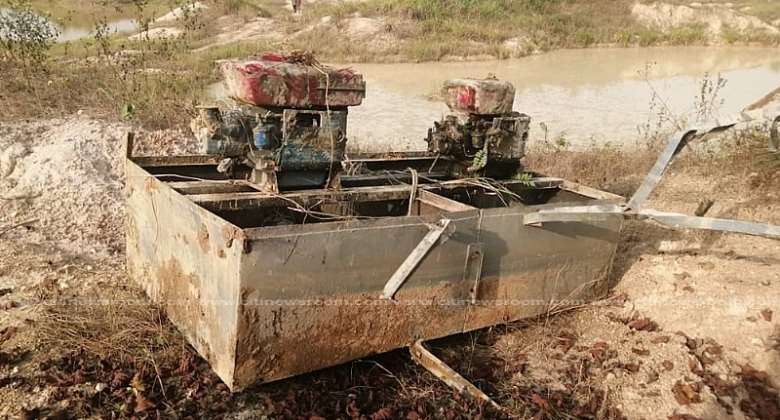 The problem of illegal mining, or galamsey as it is known in this nation, simply won't allow for many of the changes we want to see in our water bodies. The devastating effects of illegal mining are what make this massive and current mad rush of activity so talked-about.

The mining industry and its profits are well known for being extremely profitable, therefore the teaming population's wild rush into the industry is not entirely unexpected. Galamsey shouldn't be treated with child gloves because of the degradation of natural resources that comes along with it. It sends the wrong message about the sustainability of these resources when farmlands are destroyed or when our major freshwater bodies are highly polluted.

I believe that the galamsey practice is a matter of security and livelihood. People's livelihoods are at stake since so many of them need to survive. They have to take care of their own needs as well as those of their family and friends. People have been more motivated to search for alternative ways of survival as a result of the absence of sustainable employment opportunities and the low value placed on agricultural activity. Galamsey is frequently viewed as a simple way to make money. A recent TV broadcast on the galamsey trade in the Ashanti region included a farmer who claimed he didn't see the value in cultivating cocoa because mining gold could earn him a sizable sum of money. Unfortunately, there are a lot of individuals that need to survive, live comfortably, and earn a living, and there are either few or no alternative sources of income.

Once more, illegal mining is a security concern since it puts human lives and natural resources in grave danger. People will do whatever to make space for occupation once they realize how profitable galamsey is. Even for members of the local community and security personnel, this occupation gradually turns into a no-go zone. This occasionally leads to violent collisions with intense rivalry for space. Through clashes and other types of mishaps, illegal mining has killed countless lives. It continues to take life. More than any other natural calamity, water body pollution puts community members' lives in danger. Metallic mining chemicals are significant home killers of people who rely on these waters for daily activity. Additionally, our natural water and forest resources are equally in danger. The continued deterioration of lands and water sources portends a bleak future. The biggest concern that galamsey poses to Ghana's future citizens is food insecurity. This is true since there won't be any land available for farming to produce food to feed the expanding population.

It will take a team effort to prevent politics from overtaking efforts to address the problem of unlawful mining. The will to stop the threat weakens as soon as we turn the fight against galamsey over to politicians. Academicians who are sincere, proactive, and well-trained in the practical arts should be able to create a framework that will support alternative livelihoods for the expanding population and sustainable development using our natural resources.

Every succeeding administration should make it a priority to establish a functioning agro-industry that will only rely on the agricultural output of farmers. While the farmers are urged to raise crops to feed the factory, the others are hired to work in these factories. Once more, the government ought to support education, particularly in rural areas, and should remove any political restrictions from the labor market. Government initiatives to support TVET education and give young people entrepreneurial skills should be rigorously pursued to ensure that the youth are equipped to come up with ideas that will earn them a respectable living.

We will keep fighting the threat ineffectively as long as the government doesn't treat galamsey like the illicit drug trade and makes it appear the same to those who engage in it. Thus, any person who wants to mine illegally is also interested in the illegal drug trade, and the law must handle them accordingly. Ghana is a lovely country, and we must take care to avoid endangering its future by engaging in political brawls with illegal mining activities.