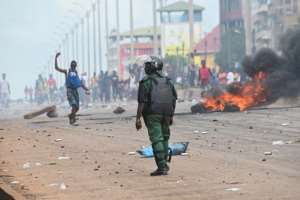 Dakar, September 30, 2022—Guinean authorities should lift the suspension of Nostalgie Guinée’s “Africa 2015” radio program and three of its journalists, and ensure the press can report freely on subjects of public interest without sanction, the Committee to Protect Journalists said Friday.

On Friday, September 23, the High Authority for Communication (HAC), Guinea’s media regulator, ordered the one-month suspension of the radio program by the privately owned Nostalgie Guinée radio station and three of the program’s hosts—Mamadou Mathé Bah, Minkailou Barry, and Kalil Camara, according to local media reports that include a copy of the suspension order and a local journalist who spoke to CPJ by phone and requested anonymity for fear of reprisal.

The regulator alleged that a September 22 broadcast of the program—which featured a telephone call from Sékou Koundouno, an officer for a coalition of opposition political parties and civil society groups known as the National Front for the Defense of the Constitution (FNDC)—included “incitement of public revolt” and “public insults,” according to a copy of the suspension order. The order also claimed that Bah, Barry, and Camara were “not being professional.”

Koundouno told CPJ over the phone that during the program, he called on Guineans to “mobilize for a return to constitutional order.” Koundouno said he made this call to action in response to Guinea’s military government criticizing the president of the intergovernmental Economic Community of West African States (ECOWAS) for opposing military rule in the country. CPJ was unable to review a copy of the broadcast because it was not available online and a request to obtain it from the radio station was not answered.

Chaikou Baldé, president of the local press freedom group Media Alliance for Human Rights (AMDH), and the local journalist who requested anonymity told CPJ by phone that on Friday, September 23, 10 minutes before starting that day’s program, the hosts learned of their suspension from public media reports. Baldé said that the suspended hosts were not informed directly or asked to respond to the regulator’s concerns before the decision. The regulator usually gives a journalist a chance to respond before ordering a suspension, Baldé said.

In addition, the regulator banned the suspended hosts from speaking to local media on any topic for one month until October 22, Baldé and the anonymous journalist said. The program has five hosts, but two were away during the broadcast and were not suspended, they said.

CPJ emailed Boubacar Yacine Diallo, the regulator’s president, and received a response that Diallo was available for an interview, but his phone was off. CPJ followed up with questions in another email but received no response.