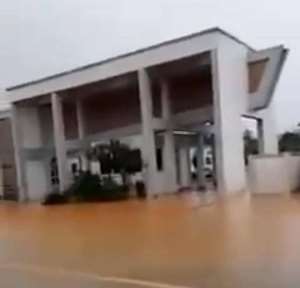 A heavy downpour has caused the overflow of the Birim River flooding the entire Kyebi township, in the Abuakwa South Municipality of the Eastern Region.

The unfortunate floods that is being recorded for the first time in the area have been blamed on the activities of illegal mining famously called “galamsey” that have displaced many of the residents.

The floods succeeded in submerging the main road from Potorase to Kyebi township.

The premises of the Kyebi High Court, Community Center, the entrance of the Danquah Memorial Library, the School of the Blind, among their surrounding houses including kiosks were not spared by the flood water.

The overflowing of the Birim River was after the long hours of the heavy downpour on Wednesday afternoon as the residents were stranded and many households displaced.

Scores of the affected victims have blamed the recent flood on illegal mining activities in neighboring communities.

Even though, the MCE for the area, Asabea Annan who visited the scene after the downpour promise to collaborate with the NADMO officials to get some relief items for the affected victims.

But the situation was getting worse since Wednesday after the downpour as the flood is spreading widely due to the overflow of the Birim river.

The officials of the Ghana National Fire Service and personnel from the NADMO were touring the affected communities to assist the victims.