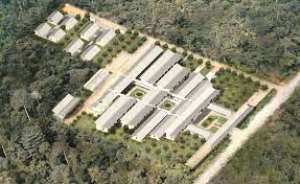 Government has since 2021 invested $75 million of petroleum revenue into the Agenda 111 health project, the Public Interest Accountability Committee (PIAC) has revealed.

The disbursement was done through allocations of the Ghana Infrastructure Investment Fund (GIIF), with US$49.4 million in 2021 and $25.6 million in the first half of 2022.

“PIAC is yet to receive specific details of all disbursements, ” the Committee stated in its semi-annual report for the first half of 2022 on the management and use of petroleum revenue.

PIAC observed that the project was decided during the first half of 2022 when there was no expenditure under the health component of the Physical Infrastructure and Service Delivery in Education and Health Priority Area during the period.

“GIIF has indicated that it has been engaged by the Ministry of Finance (MoF) to help ensure administrative and project management efficiencies as well as payment integrity throughout the process, especially for the 101 standard 60/100-bed district hospitals, ” the report noted.

It was also highlighted that the GIIF had established a new ring-fenced subsidiary vehicle known as H-GIIF to execute the transaction and all payments to the contractors.

PIAC has, therefore, recommended that Government directed subsequent disbursements to GIIF intended for Agenda 111 to the Ministry of Health to support the Agenda 111 Project as an expenditure under Priority Areas.

“This will enable GIIF focus on its core mandate of investing funds, including its Annual Budget Funding Amount (ABFA) disbursements, in commercial infrastructural projects that would yield returns,” the report said.

It has also advised the GIIF to focus the utilisation of its share of ABFA on viable investments in accordance with the GIIF Act, 2014 (Act 877) and policy guidelines of the Fund.

The Agenda 111 project involves deliverables such as the designing, procuring, constructing, equipping and commissioning of 101 District Hospitals and six Regional Hospitals in the newly created regions.

All the hospitals are expected to have staff accommodation for doctors, nurses and other health workers.