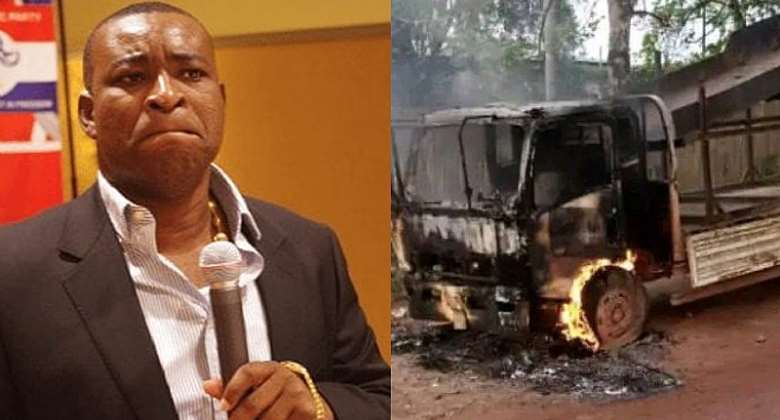 A mining truck belonging to the Akonta Mining Company, a subsidiary of the Wontumi Group of Companies has been reportedly burnt by Samreboi-based Samartex Timber and Plywood Company Limited.

With a sorrowful heart, the business magnate speaking on Kumasi-based Wontumi TV’s Morning Show today, September 30, said the incident has saddened him.

He described the incident as a plot by Samartex to sabotage his mining company. He intimated that he is only being quiet because emotions are not used in solving problems.

“I have kept quiet because you can’t use emotions to solve problems. You have to be rational,” he complained

Chairman Wontumi added, “it’s a plot by the Samartex Timber and Wood Company to destroy my company.”

His contract which was signed before moving to his area of operation, according to him, is valid till 2035 and, as such, the timber company, also, a private company like his, has no right to burn his property.

Latest Photo Reports
Catch up with all the political quotes from our politicians.
Advertise here
More from Headlines
ModernGhana Links
Sammy Gyamfi pens heartwarming message to Mahama on his 64th birthday
Mahama clocks 64 today
You are a testament of God's goodness — Mahama’s Aide eulogies her boss on his 64th birthday
TOP STORIES