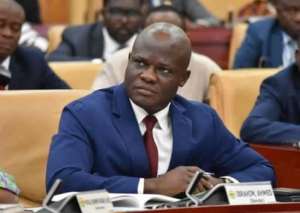 Ahmed Ibrahim, the Deputy Minority Chief Whip and Member of Parliament for Banda, has lamented the security implications should the unregistered SIM cards be blocked after today's deadline, September 30.

According to him, the previous action taken by the National Communications Authority (NCA) and the Ministry of Communications and Digitalisation to block some unregistered SIMS from calls, data and other services for some days caused chaos in the country.

Speaking on the Accra-based Joy News on Thursday, September 29, the lawmaker suggested that the National Security Minister advice President Akufo-Addo about the national security implications should SIM cards be blocked as planned.

“The two-day blockage of people’s SIM cards, the National Security Ministry had to go to the Presidency to talk to them that the country was about to be destabilized before the SIM cards were released.

“They will not go ahead to tell you this but that was the practical situation that happened. Ghanaians were furious and they nearly exploded," he lamented.

The Minister, Hon. Ursula Owusu Ekuful, at a press conference on July 31, reluctantly extended the earlier deadline for SIM Card re-registration to today, September 30, after many people cried and agitated about it.

According to the Ministry, any SIM card that has not been re-registered by the deadline will be denied access to telecommunications services.

Ghanaians who are yet to register their SIM cards or receive their NIA cards are again calling on Hon. Ursula Owusu Ekuful, the sector Minister, to again extend the deadline.

The deadline is today and the Ministry is yet to make any comment.