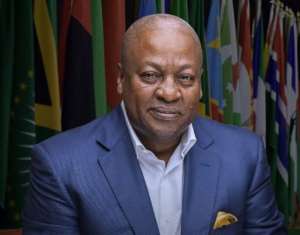 340 million people worldwide will be affected by global warming according to a story written by Erica Ayisi with support from the Pulitzer Center. This she said will cause the sea to rise significantly by the middle of this century, and that some 37% of Ghana’s coastal land has already been lost to erosion and flooding.

President Mahama's Government, therefore, undertook a number of sea defence and coastal protection projects to safeguard coastal communities in the country against the vagaries of the sea. These projects include:

Sakumono Sea Defence Project: The first phase of this project was completed, and the second phase was started at a cost of US$39.9 million. The total stretch under protection with this phase is 3.5 kilometres which saw the completion of 860 metres of reconstructed revetment structure, 554 metres of concrete gravity walls, 1.4 kilometres of new armour rock revetment.

Atorkor - Dzita - Anyanui Sea Defence Project:
Following the completion of the first and second phases of the project, the third phase, meant to protect a coastal stretch of about 1.5 kilometres was also completed at a cost of US$ 11.4 million. This involved the construction of seven armour rock groynes. All the seven groynes under the third phase were constructed. The length of the seven groynes is 600 metres.

Ada Sea Defence Project
The second phase of the Ada Sea Defence Project which will protect about 10 km of coastal stretch was commenced following the completion of the first phase in August 2013. At a cost of 165 million Euros. The project was designed to protect Ada and its environs against wave impact and reclaim land to facilitate tourism and development in other sectors.

Ngyiresia Coastal Protection Project
This project was designed to protect the main Sekondi - Essipong road from erosion and its attendant transportation disconnect between Essipong and Secondi. This project was completed and handed over in April, 2014.

Aboadze Coastal Works
This US$ 28.5 million project was undertaken to protect the Aboadze Thermal Plant, as well as life and development in the Aboadze community against wave impact. It is also to facilitate fishing activities. The total coastal stretch protected is about 2 km and entailed the construction of an armour rock revetment.

Nkontompo Coastal Works
The cost of this project is US$ 23 million, and it is aimed at protecting life and development in the fishing communities of Nkontompo, Poasi and New Takoradi against wave impact as well as facilitating fishing activities. The works under this project protected about 2.5 km of coastal stretch. The works completed so far have enhanced the fish landing sites at Nkontompo, giving the fisher-folks larger and safer harbours.

Besides, work started on the following coastal protection projects following the completion of procurement processes and stakeholder engagements:

Dansoman Coastal Protection Project
The objective of undertaking the project is to protect life and developments at Dansoman and its environs. Works under the project entail the construction of an armour rock revetment which will protect about 2 km of coastal stretch. The cost of the project is US$ 31.2 million.

Mensah Guinea Sea Defence Project
Efforts were also underway to undertake coastal protection projects from La to Chorkor in the Greater Accra Region, Amanful - Kuma, New Takoradi and Axim in the Western Region and Anomabu in the Central Region in the near future. The procurement processes commenced before President Mahama left office.