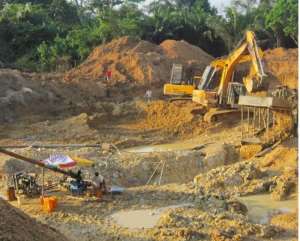 Occupy Ghana in an open letter to President Nana Akufo-Addo said it is dumbstruck at the government’s “absolute impotence, in the face of the brazen destruction of our lands and wanton poisoning of our water bodies.”

As far as it is concerned, the government has no excuse to fail in the fight against the menace.

“Every law required to regulate the mining industry exists. Every government agency required in the police, the courts, and even the military) exists. Every district, municipality, and metropolis to enforce the law (namely the Ministry of Lands and Natural Resources, Minerals Commission, in which Galamsey takes place has a fully-paid Chief Executive supported by an Authority and Assembly.”

“What is going on defies reason and only gives support and credence to the popular rumour or belief that the very persons who should be fighting this crime, are rather those involved in and benefit from it.”

It said the President, Nana Akufo-Addo is failing and, betraying the trust reposed in him.

“Sir, can you simply ensure that the law, namely the Minerals and Mining Act, 2006 (Act 703), as amended, is enforced without fear and favour and irrespective of whose ox is gored?”

The pressure group vowed to pressure the President’s neck till he fulfils his promise to stop galamsey.

“We will send a reminder to you every Monday until we see firm action to stamp this crime out. If that fails, we will shame your government by going to court to compel the government to sit up and do its job. That is not a threat, sir; it is a promise,” it added.