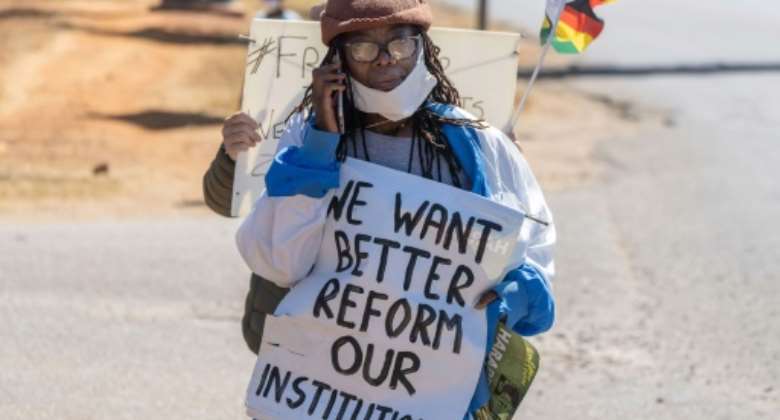 The feminist writer, here seen with her poster in July 2020, has said she will appeal the verdict. By ZINYANGE AUNTONY (AFP)

A Zimbabwe court Thursday found award-winning novelist Tsitsi Dangarembga guilty of "inciting violence" after she held up a sign calling for reform at a small protest during the coronavirus pandemic, an AFP reporter said.

It handed her a fine of 70,000 Zimbabwean dollars (around $200) and a suspended six-month sentence on condition she does not commit a similar offence in the next five years.

"I'm not surprised," the author told the media outside the court in the capital Harare.

"Our role as citizens is being changed into a role that is not an active citizen, but a subject, and we are not a monarchy," she said.

"As citizens we have rights, and that is what is being contested right now in Zimbabwe."

The 63-year-old feminist figure, known for her novel "Nervous Conditions", was arrested at the end of July 2020, with a journalist friend, Julie Barnes, and a handful of other demonstrators.

She had marched in the empty streets of Harare, holding a banner that read "We want better -- reform our institutions", before being hauled into a police van. She was freed on bail a day later.

She "demonstrated without having asked permission" and had "the intention of inciting violence", an AFP journalist present in court heard.

The author had also held up another sign that day calling for the release of a fellow journalist, , who was also imprisoned on similar charges of incitement to violence.

She denied resisting arrest but admitted asking the police what specific law she had violated.

Her 1988 novel "Nervous Conditions" was the first book to be published in English by a black woman from Zimbabwe, and earned her the prestigious Commonwealth Writers' Prize.

Arbitrary arrests and repression against civil rights organisations have hardened under the presidency of Emmerson Mnangagwa, who succeeded Robert Mugabe in 2017.

Dangarembga said she would appeal her conviction.