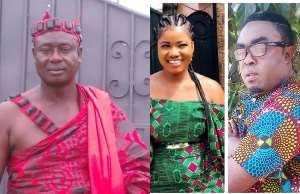 Another suspect has been arrested in connection to the Mankessim murder.

Report gathered by this portal indicates that the suspect popularly known as Kobbie in the area is the husband of Akyere, Nana Clarke's niece.

According to information, Kobbie was hired to dig the hole in which Georgina Asor Botchwey, an nursing trainee was buried at Nana Clarke's house at Mankessim.

Kobbie was apprehended in Akwakrom, a community in the Ekumfi District of the Central Region following police intelligence.

The two however were charged with conspiracy to commit crime to wit murder and murder, contrary to section 46 of the Criminal and Other Offences Act 1980, Act 29.

The prosecution, DSP Daniel Gadzo pleaded with the court to give them some time to conclude their investigations.