GAWU kicks against parents overloading their children with work 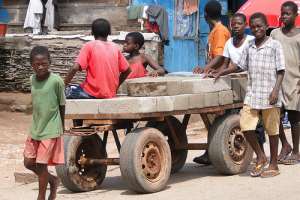 It is good that children help their parents, but there should be a limit to what they do, Mr. Edward Kareweh, General Secretary of the General Agricultural Workers Union (GAWU), has advised.

Mr. Kareweh asked: “For instance, if the child goes to the farm with the parents and they are coming back, does the child also carry heavy loads of firewood to the house?

He then cautioned that, “overloading children with work could affect their performance at school and that was a critical issue that needed to be addressed with immediate effect.”

Mr. Kareweh, in an interview with the Ghana News Agency (GNA), in Tema said children must be given the chance to relax after school and play for some time with their peers as it enhanced their learning capacities and help in their development.

The GAWU General-Secretary, therefore, cautioned parents to weigh up the household chores they allow their wards to undertake.

He said that any extreme responsibility imposed on children, whether to get paid or not, amounted to child labour because each had the same impact on the child's school attendance, health, and wellbeing.

Mr. Kareweh explained that children needed to be protected because they were physically and mentally immature to protect themselves, noting that they deserved to be raised in a healthy and safe environment, where their rights would not be violated.

“There is a conflict between child labour and child work, child work can be the child following the parents to the farm, learning to cook and others but where child work becomes harmful to the health of the child or deny the child from going to school and wellbeing then it becomes child labour,” he stated.

The GAWU General Secretary explained that the Ghana Chamber of Agribusiness had joined forces with Union to get to the root causes of slavery, abuse, and force labour among others and find amicable solutions to reduce its effects on the country.

Mr. Kareweh noted that the collaboration was also to ensure that there was no modern slavery in Ghana by tackling an indecent work environment, forced labour, inadequate payment of labour and the rest.