One dies in Menuso head-on collision accident, another in critical condition 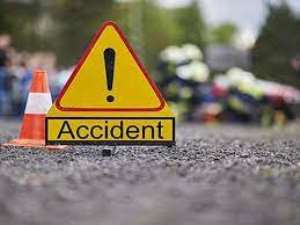 A head-on collision by a taxicab and motorbike on the Menuso- Kadjebi road in the Oti Region left the pillion passenger dead and the rider seriously injured.

The deceased has been identified as Mary Timpon, a 52-year-old-trader and native of Anfoega in the North Dayi District of the Volta Region, while the injured is Mawuli Gator from the same town.

When the Ghana News Agency visited the accident scene at 2000 hours on Tuesday, there were five police personnel, led by Chief Inspector Emmanuel Agbewodi from the Kadjebi Police Station there.

A police source said the accident occurred at Tsatsa Nkwanta, a community between Menuso and Okanta in the Kadjebi District.

The taxi driver, whose name was given as Hukporti, alias “Land guard,” from Kadjebi, was heading to Poase-Cement at the time of accident.

Preliminary investigations showed that the taxicab veered off its lane and collided head-on with the motorbike.

His vehicle, with registration number GT-628-U, has been impounded and he is in police custody assisting with investigations.

The body of the deceased had been conveyed to the St. Mary Theresa Hospital, Dodi-Papase, for preservation.