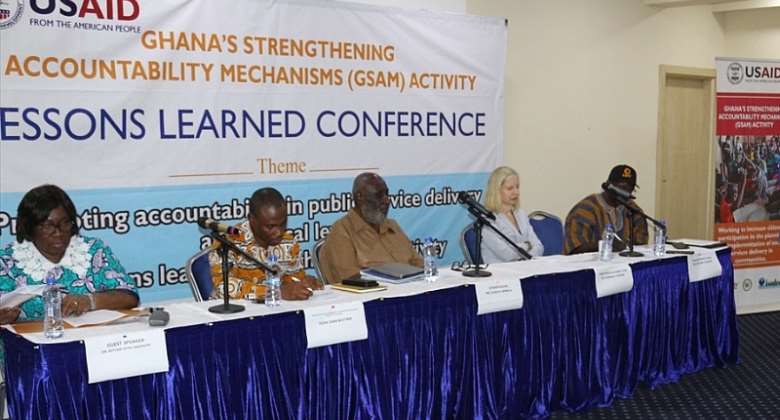 The government has pledged to continue improving governance, and development and bringing its services to the doorsteps of Ghanaians.

The Minister for Local Government, Decentralization and Rural Development, Dan Botwe, who said this in a speech read on his behalf at the national close-out of the Ghana Strengthening Accountability Mechanisms (GSAM) in Accra on Wednesday, said popular participation was a key pillar in decentralization processes in Ghana.

GSAM is an eight-year USAID-funded project seeking to improve accountability, transparency and performance at the local government level by strengthening the government’s and citizen’s oversight of capital development projects in 100 districts across 10 regions of Ghana.

The Minister acknowledged that decentralization is a process and, therefore, cannot be achieved without putting the necessary systems together and welcomed GSAM’s intervention in that regard.

Mr Botwe said GSAM has contributed to improving the responsiveness of MMDA’s to citizens’ demands and efficiency in the management and implementation of development projects in communities.

He pledged the ministry’s commitment to consolidating the gains made about the management interventions that have generated positive results relating to accountability and transparency practices in the MMDAs.

The USAID Mission’s Director, Kimberly Rosen stated that the goal of the project is to increase citizens’ capacity to demand accountability from the trustees of public resources.

She also stated that a USAID-commissioned impact evaluation of the GSAM activity revealed that consultation between citizens and their respective local governments on infrastructure development has improved.

Kimberly Rosen added that the evaluation also found that a key intervention with the Ghana Audit Service (GAS) to conduct value-for-money audits on district capital projects has reduced the incidence of partisan manipulation of district budgets by local politicians.

She said the “impact of GSAM in strengthening accountable governance in the districts has been positive in increasing responses of local authorities and service providers to citizens’ concerns. For example, 51% of 880 community priority needs identified with GSAM support were integrated and budgeted for in the 2022-2025 Medium-Term Development Plans (MTDPs) in 50 districts. This represents a significant increase from a baseline of 12% in 2016. A recent follow-up shows 5% have already been completed.”

The Deputy Chief of Party for GSAM, Mr Samuel Boateng highlighted some of the lessons learned and the opportunities for the future. He also indicated that GSAM activity has improved citizens’ knowledge of development for the community and there is more participation by citizens in the local governance process.