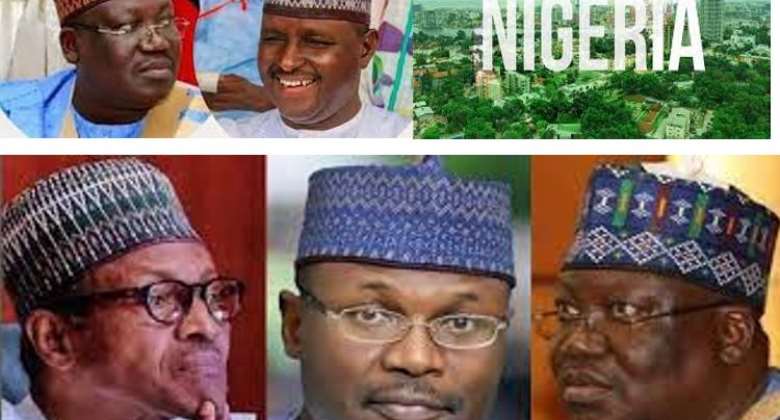 In May of 2022, as widely reported by the media, the Senate President, Ahmad Lawan, told Nigerians, "I stand here before you to tell you why I believe that I have what it takes... (to make me) an effective and efficient President of the Federal Republic of Nigeria after President Muhammadu Buhari finishes his tenure."

In early June, the National Chairman of the All Progressives Congress (APC), Senator Abdullahi Adamu, told the National Working Committee that he arrived at the choice of Lawan as a consensus candidate after consultation with President Buhari.

Lawan promised that he would start where the President, Major General Muhammadu Buhari (retd.), stopped. As the media reported, Lawan was apparently covertly chosen because Buhari was known to have said he should be allowed to choose who would replace him, and he found it in a fellow Muslim northern man who always carried out his agender with little or no questions. To use a common phrase, a man who does the bidding of the president or what Buhari asks or says.

Even when the Northern governors said it is only fair that the presidency comes to the non-northern regions, Abdullahi Adamu, national chairman of the All Progressives Congress (APC), by the media report, released the secret of Lawan as Buhari's man, and he reportedly stated that Lawan's as consensus candidate was with the President's permission. Buhari later denied this talk about Lawan when the matter became public.

But unfortunately for Buhari, Adamu and Lawan, their fellow Muslim brothers, who are mostly APC Governors, insisted that power must shift to the South after Buhari’s tenure.

Lawan did not care about the collective standing of the APC governors. Lawan contested and lost to the national leader of the All Progressives Congress, Bola Tinubu, who, after emerging as the presidential candidate of the party in front of the world while giving his acceptance speech at Eagle Square, Abuja, shamed Lawan and said he should "now go and lick his wounds."

Lawan, a lawmaker since 1990, reportedly sought the assistance of the APC's national chairman, Adamu, to claim the senatorial ticket from Mr. Bashir, even though he only contested in the APC presidential primary elections; as such, he could not have contested for the Yobe North senatorial ticket.

But in a society where the rule of man rather than the rule of law prevails, Lawan and his straight face and secret supporters wanted to dismiss the true winner, Bashir Machina, of the senatorial primary election in Yobe North for the zone on May 28, 2022.

Even when it is known that the Independent National Electoral Commission (INEC) supervised the senatorial primary election in Yobe North for the zone on May 28, as part of Nigerian institutional immorality, it refused to take a definitive and public stand when it released the list of senatorial candidates. The name of the winner, Machina, of the senatorial primary election for the Senate President’s district, Yobe North, was missing.

A fake letter purportedly authored by Machina indicating his withdrawal from the senatorial contest appeared in INEC.

INEC kept playing its twisting games and refused to openly and ethically state that it stood with Machina fully. Why the sudden backtrack after affirming his win? Machina raised the alarm that his life was in danger because he refused to step down for Lawan. INEC, as part of its executive duty, did not have to wait for the court to do its job.

In a society where the judiciary is chronically corrupt and where judicial officers are sometimes known to operate and pass judgment under the psychology of influential money and the threat of fear, Machina took his chance against INEC, APC, and Lawan. It worked this time!

There are still judges who believe in the rule of law and protect the common man with no absolute power.

Just like Tinubu asked Lawan to go and "lick his wounds" in shame, the judge reminded Lawan that the senatorial primary he said he participated in was an imaginary, ghost-like or "phantom June 9 primary election" that produced him as the winner and candidate. And the judge reminded him it was a "nullity" because INEC did not monitor the counterfeit, fake, or yeye election. Nigerians know that the only one INEC monitored which Lawan lost was the presidential primaries, in which Tinubu told him he could now lick his wounds after losing out.

Lawan, who entered politics in 1999 after working in education, holds a bachelor's degree in Geography from the University of Maiduguri. He once lectured in the Department of Geography at the University of Maiduguri, so he can return to the university to maybe teach Geography, and with his reported master's degree and doctorate degree in Remote Sensing, maybe he can look for a university in Nigeria and teach about ways of remote sensing in geography, meaning ways of obtaining information about objects or areas from a distance, especially from aircraft or satellites.

However, it will be to the benefit of a developing country like Nigeria if he uses his decades of legislative and senatorial experience to create an educational program in any Nigerian elementary, secondary, or university to teach civics, social studies, or government. At the university level, he can teach political ethics, also known as political morality or public ethics, which focuses on the practice of making moral judgments about political action and political agents.

Which is really needed in a struggling but highly troubled nation like Nigeria. Lawan can also start an educational program in government ethics that applies to the processes, behaviors, and policies of governments and the public officials who work in elected or appointed positions.

Machina, do not behave like Lawan has in recent months in terms of properly engaging in election ethics and law. Help push Nigeria forward and no one wants to hear that you are being told to go lick your wounds. This means getting defeated and marked with an embarrassing political ending.

You’ve been a dependable husband – Lordina celebrates Mahama...
59 minutes ago