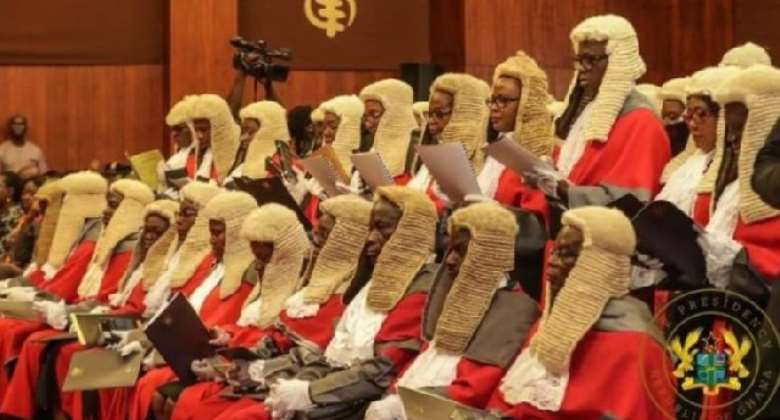 Ghana’s judges and magistrates say the “unnecessary” and “incessant” attacks on them by persons in the media undermines the judiciary.

Speaking at the annual conference for judges and magistrates in Accra, the President of the Judges and Magistrates Association, Justice Henry Kwofie, said: “You all recognise that the judiciary, as an institution, and, judges, in general, have been the subject of quite a lot of rhetoric, attacks and judgment of our courts, even judgments of the highest court of the land have been attacked and the judges who delivered the same judgments have not been swerved either”.

“In my view, impugning the motives of judges is actually undermining the integrity of the judiciary. As a result of these unnecessary and incessant attacks, the association, in the first, for about three to four terms, has come out to issue statements to correct the erroneous impression and deliberate misinformation and falsehood churned out against the Judiciary”, he added.

The association, he noted, “must not be misunderstood to be against criticism of judges or the judiciary. Criticism, if it is constructive, helps to improve any sitting and makes the various actors sit up but that is not what we are seeing lately in the press and the various social media”.

Also at the conference, the President of the Ghana Bar Association, Mr Yaw Acheampong Boafo, said: “The judiciary is not perfect and infallible” but noted: “The proper tools and methods for improving and correcting the work of the judiciary are through constructive criticisms and superior arguments, not acts that target their personality, undermine their independence, bring dishonour to the administration of justice and endanger their security and safety”.

“I pledge the support of the Ghana Bar Association to uphold the noble profession and the honour and dignity that Judiciary deserves,” he said.

Some weeks ago, former President John Mahama said the image of Ghana’s judiciary is “broken” under the leadership of Justice Anin-Yeboah, and expressed the hope that a “new Chief Justice” leads an image-cleansing crusade in the future, since, in his view, the current Chief Justice cannot lead such a process.

Addressing a conference of lawyers of the opposition National Democratic Congress (NDC) on Sunday, 28 August 2022, Mr Mahama bewailed that the judiciary has now become the butt of jokes, as a result of its biased rulings and decisions on cases with a political tinge.

Recently, he noted, “so badly has the image of our judiciary deteriorated that many of our citizenry openly make a mockery of our justice system and of our justices”.

“The phrase, ‘Go to court’ is, these days, is met with derisive laughter, instead of hope that one will truly get justice if he went to the court”, Mr Mahama explained.

He said: “If people are not poking fun about politics and inducements being used to sway the hand of justice in the lower courts, then it is poking fun and making statements about the 7-0 of the ‘Unanimous FC’ verdicts, which, mostly, involve cases of a political nature in our Supreme Court”.

“This is an unfortunate development”, he regretted, pointing out: “One of the scariest existential threats to any democracy is when citizens think their judiciary holds no value for them” or is of “no use to them, and this is the security threat that the national security apparatus tried to draw the attention of the nation to, recently but was poorly received by the President and his party”.

“It is scary because it threatens the peace and stability of our democracy and we must quickly correct this fast-spreading notion”, warned Mr Mahama.

He said it is a harbinger of danger.

“If care is not taken, we’ll get to a stage where people will have no qualms about taking the law into their own hands because they do not have the confidence that they can get any justice from the system”, he cautioned.

“There’s, therefore, the urgent need for the Ghanaian judiciary, to work to win the trust and confidence of the citizenry and erase the widely-held perception of hostility and political bias in legal proceedings at the highest court of the land”, he urged.

“Unfortunately”, Mr Mahama noted, “we have no hope that the current leadership of our Judiciary can lead such a process of change”.

“We can only hope that a new Chief Justice will lead the process to repair the broken image that our judiciary has acquired over the last few years”, he said.

This is not the first time the former President has lunged at the judiciary.

In March this year, he said: “We do have problems with the judiciary, I must say”, adding: “I think that it is necessary for some internal reforms to take place there”.

“It is necessary for the Chief Justice or whoever is responsible, to make some reforms”, Mr Mahama said when he addressed the US Chapter of the National Democratic Congress (NDC) at Bentley University over the weekend.

Bemoaning how, in his view, “most of the governance institutions have been politicised”, Mr Mahama said: “I give the example of the Judiciary – It is only in Ghana that a Supreme Court will make a decision that a birth certificate is not proof of citizenship”.

“There are many such funny judgments that have been given”, he added.

“I remember at one time, our colleague, Professor Raymond Atuguba, said that from research he had done, judges turn to give their judgments in favour of the political party or leader that appointed them”.

“He was subjected to such a whirlwind of indignation by the judiciary but if you bring it down to what is happening today, and you look at it and see who appointed who, you will find that there was some truth in the research.”

“The thing is, our Constitution gives the security of tenure to judges. Once you have been appointed, you cannot be removed”.

“That is why we give security of tenure so that you will have the courage, no matter who appointed you, to give judgment according to your conscience. That is what our judges should do. They must rise to the occasion”, urged Mr Mahama.