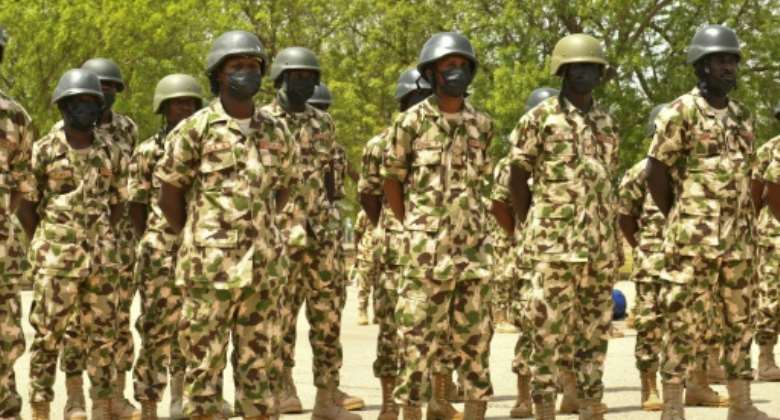 Soldiers have been targeted in recent attacks in southeast Nigeria. By Audu Marte (AFP/File)

Gunmen killed five soldiers and a civilian in southeast Nigeria, police and local media said Thursday, after the latest bloodshed in a region where separatist tensions often flare.

Wednesday's attack on troops in Umunze area of Anambra state was condemned by the governor though he did provide casualty numbers.

Security will be a major issue in February's election to replace President Muhammadu Buhari, with troops fighting jihadists, separatist gunmen and criminal gangs across parts of Nigeria.

"We have deployed our men to hunt down the assailants," he said.

Local media said five soldiers in a vehicle were ambushed and shot dead, while a civilian bystander was killed by stray bullet.

The armed forces did not immediately respond to a call seeking details.

The assault came barely three weeks after the convoy of an opposition lawmaker, Ifeanyi Ubah, was ambushed in the state, killing five people including two security escorts.

Although the senator was unhurt, the assault underscored growing insecurity in the region.

No group has claimed responsibility for the violence, less than five months before February 25 presidential, senate and congressional elections.

In a statement late Wednesday, Anambra state governor Charles Soludo condemned the killing of the soldiers and the attack on the lawmaker.

"We condemn this wicked and cruel attack in the strongest terms. The perpetrators of this act must pay," Soludo said.

"We are not going to rest on our oars, including those people that attacked Senator Ifeanyi Ubah and the rest. There will be absolutely no hiding place for them."

Southeast Nigeria has seen scores of attacks blamed on the outlawed Indigenous People of Biafra (IPOB) group or its armed wing ESN.

IPOB, which seeks a separate state for ethnic Igbo people, has repeatedly denied responsibility for violence in the region.

More than 100 police officers and other security personnel have been killed since the beginning of last year in targeted attacks, according to local media tallies.

Prisons have been raided with scores of inmates freed and weapons stolen. Local offices of the national electoral authorities have also been targeted.

IPOB's leader Nnamdi Kanu is in government custody and faces trial for treason after he was captured overseas and brought back to Nigeria.

Separatism is a sensitive issue in a nation where the declaration of an independent Republic of Biafra in 1967 by Igbo army officers sparked a three-year civil war that left more than one million people dead.

Structure of government's debt restructuring plan is unaccep...
47 minutes ago