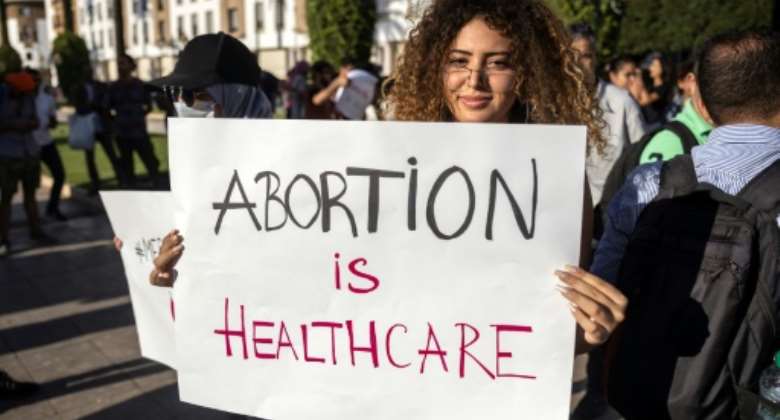 Moroccan activists demonstrate in the capital Rabat after a teenage girl died as a result of an unsafe secret abortion. By FADEL SENNA (AFP)

Protesters gathered outside the parliament, some holding placards denouncing the law which punishes abortion.

"Having a child must be a choice," activist Sarah Benmoussa told AFP.

"We're here today because our voices matter," said Khaoula, 23, a journalism student who joined the crowd. "Every human being should be able to control their own body."

The death of the teenager earlier this month in a village in central Morocco has reignited calls by feminist groups and activists to legalise abortions in the country.

Abortions in Morocco are punishable by up to five years in prison, except for cases when the woman's health is in danger.

"We demand the decriminalisation of abortion from the age of 12," said Fouzia Yassine from Spring of Dignity, a coalition of Moroccan feminist associations.

"We renew this call today. Lawmakers bear responsibility for this situation and for the violence and hardships the women endure."

In 2015, Morocco debated the "urgent need" to reform legislation in the face of hundreds of clandestine abortions performed daily, often under appalling conditions.

An official commission recommended that abortion be legalised in special circumstances, including for cases of rape or serious foetal abnormalities.

No law reform followed these recommendations, despite the lobbying of women's rights supporters.