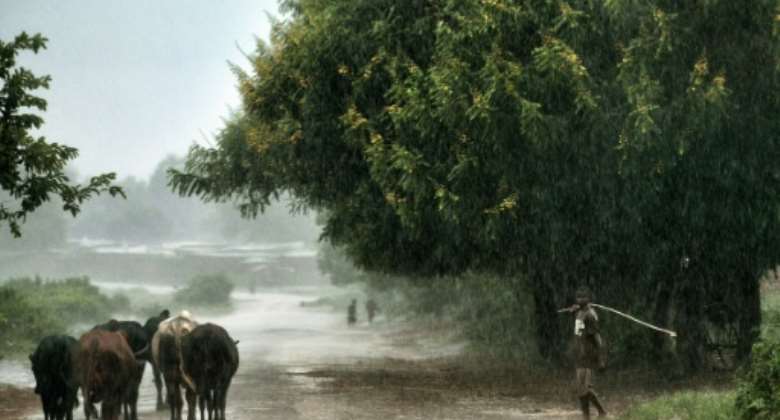 A young man guides cows along a road under heavy rain in 2016 in Malawi's capital Lilongwe, where the United States is putting in a $350 million grant to upgrade roads. By ARIS MESSINIS (AFP/File)

The United States on Wednesday signed a $350 million grant for infrastructure projects with Malawi's President Lazarus Chakwera, hailing his record on good governance.

The aid through the Millennium Challenge Corporation, which assists developing nations that meet democratic benchmarks, will fund a major road network in the African country to connect rural and urban areas.

Secretary of State Antony Blinken hailed Chakwera for his "deep commitment to democratic and economic reform" and called the project a "remarkably positive opportunity" to boost agricultural production in Malawi.

"These projects will be transparent. They'll be collaborative and built to meet the highest standards of quality," Blinken said.

Chakwera was elected in 2020 on a campaign to fight corruption in the developing country. Earlier this year he sacked seven ministers over graft concerns.

"My administration has taken a zero-tolerance stance against corruption, shielding no one from investigation and prosecution," Chakwera said before the signing with Blinken.

Voicing gratitude to the United States, he said, "Together we're making strides for everyone's good."

Chakwera called on the United States to consider a further project that would jointly include Zambia and Mozambique and give landlocked Malawi reliable access to the Indian Ocean.

"Safe and reliable rail and road transport investments will certainly help reduce barriers to growth and create opportunities for all of our people," Chakwera said.

President Joe Biden's administration has put a renewed focus on Africa as it seeks to counter not only China but Russia, which has sought to limit support in the developing world for punishing Moscow over its invasion of Ukraine.

Blinken said the Malawi project would also address a key US priority by trying to reduce gender-based violence by making it safer for women to bring goods to markets.