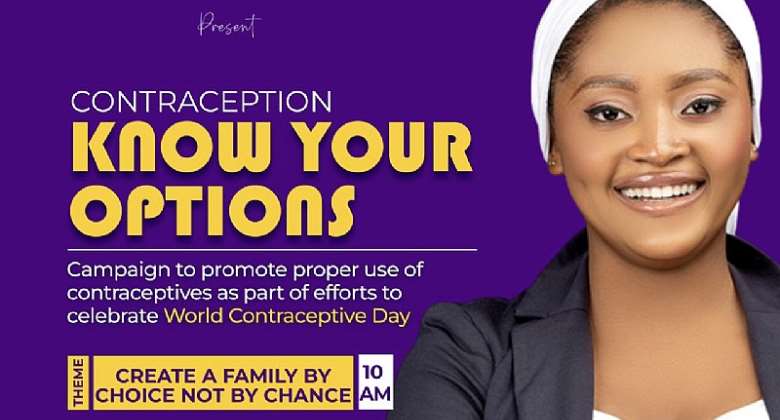 Ayinawu Alhassan Adam, fondly known as Aina, an aspirant in SRC's Women's Commissioner race at the Ghana Institute of Journalism (GIJ) has advised her fellow female students in their effort to prevent unplanned pregnancies.

To avoid pregnancies after unprotected sex, most women, particularly tertiary students, resort to all manner of contraceptives.

But in most cases, they end up causing more harm to themselves due to their lack of knowledge in its usage and even which one to use at a particular time.

In a campaign dubbed "Create a Family of Choice, not by Chance," held as part of Miss Aina’s initiative during the World Contraceptive Day celebration on Monday, September 26, she organised the seminar to promote the proper and effective use of contraceptives for the desired results.

Resource persons familiar with in-depth knowledge about the effective use of contraceptives were invited to the Ghana Institute of Journalism's Ring Way Campus to share their knowledge with the students supported by GTI Health Care.

This "saviour" initiative, as some beneficiaries described it to Modernghana News, was attended by a large number of people, including not only GIJ students, but also people from outside the institute who heard about it on TV.

Sharing her thought about the event, a participant said, "These days, contraceptives have been what we have chosen to prevent ourselves from getting pregnant after sexual intercourse, but for me, for instance, I always abuse them. The outcome of this is something I cannot openly say. So this has helped because I can use it effectively without any additional stress."

Speaking on the sidelines of the event, Miss Aina told Modernghana News, "So as I'm seriously eyeing being given the mandate to steer the affairs of all women at GIJ, I decided to include this project to bring on board experts to help us (the ladies) with how we can use contraceptives effectively without any side effects after usage since many students are unable to choose the abstinence method."

She added, "And about the venue, I chose the old campus (Ringway) because my first programme was held at the new campus and I want each campus to equally experience what I have arranged for the student body to prosper in their endeavours within the auspices of the Institute."