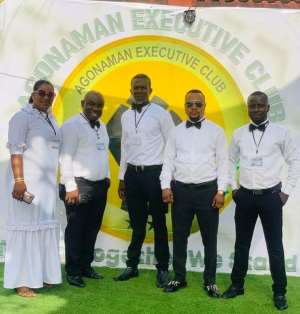 Agonaman Executive Club, a development oriented organization has been launched at Agona Swedru in the Central Region to spearhead the development of Agona State, especially in the areas of education and infrastructure.

The over 70-membership club aimed at developing the area says they were going to partner Assemblies in the jurisdiction to produce quality human resources needed for national development.

According to the General Secretary of the Club, Mr. Robert Abeku Ansah, they will do everything possible within their means to improve academic standards and social amenities.

"The Agonaman Executive Club started as an Association with the intention of meeting the welfare needs of its members, but we saw the need to set up a formidable Club made up of people from diverse ways to open our doors for development partners.

"We are therefore in partnership with international organizations to create job opportunities for the youth in Agonaman which consist of Agona West Municipal Assembly and the Agona East District Assembly.

"We have also participated in World Youth Summit to seek support for the well-being of the youth in the country and around the globe. Plans are far advanced for regular participation in subsequent World Youth Forums.

"One of our major priorities is to improve the academic standard of education. The abysmal performance of our students in recent times has become a source of worry.

"To this end, we have decided to work with all the stakeholders in the education industry including Parents Associations (P.A), Old Students Association as well as various Civil Society Groups to work together to improve the academic standard," Mr. Abeku Ansah stressed.

The General Secretary in his report hinted that plans were far advanced for the club to construct a modern library facility at Agona Swedru to cultivate the habit of reading among children of school going age.

"Aside other things, Agonaman Executive Club is going to organize all the Youth Groups to support self-help projects in their Communities.

"As a registered Club in the records of the Registrar General, we have the ability to bring together the most vibrant and energetic young people of Agona together towards our ultimate dream.

"Again, plans are far advanced for the construction of a visitors lodge at the Agona Swedru Government Hospital, construction of a police post to boost security situation in Agona and also roll out programmes towards United Nation Sustainable Development Goals," the General Secretary noted.

Regent of Agona Swedru, Nana Kweku Essieni V lauded members of the club for their foresight to spearhead the development of Agonaman noting that Nananom will support them to achieve their set goals and objectives.

As a senior lecturer at the Faculty of Mathematics at the Kwame Nkrumah University of Science and Technology (KNUST), Professor Isaac Kwame Dontwi who chaired the ceremony pledged to support skill training among the youth in Agona to be self-dependent. He promisese to contribute his quota towards the sustainability of Agonaman Executive Club.