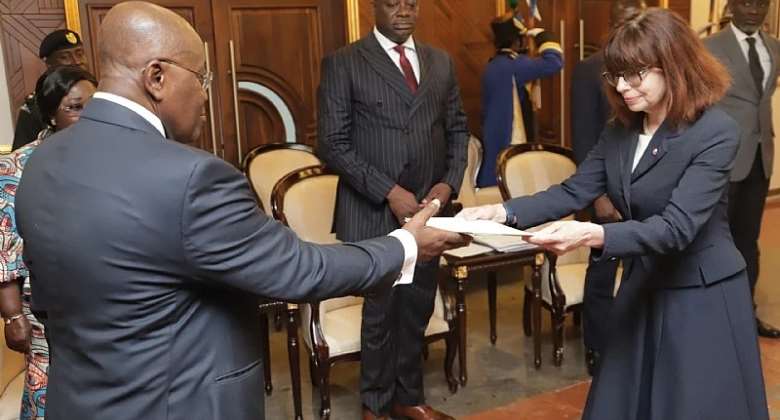 Four Foreign envoys at separate occasions on Tuesday, presented their Letters of Credence to President Nana Addo Dankwa Akufo-Addo at the Jubilee House to begin their duty tour of the country.

During separate interactions with President Akufo-Addo, they all commended Ghana for its leadership in promoting democratic values and the maintenance of peace and security, particularly in the West Africa region.

Bernice Owen-Jones, in her remarks, said there was a lot Australia and West Africa could collaborate and do to address some pressing security challenges in the region such as terrorism

She said her country currently was funding an international counter-terrorism academy in La Côte d'Ivoire to deliver training and security capabilities in the region.

The Australian Ambassador said the mining sector for decades had been the main pillar of the bilateral relationship between Ghana and Australia, and in some countries in the West African Region.

Australia, she stated, has over $40 billion in investments in west Africa and was proud of her country’s engagements in the extractive sector in Ghana for which both countries had derived many benefits.

She said there were other sectors of the economy that the two countries were closely engaged in — education — where many Ghanaian professionals had been supported to study in Australia through the Australia Awards Scheme.

Bernice Owen-Jones commended the work of the Australian Commission in Ghana which has so far supported over 250 projects over the last 20 years to deliver development to communities.

She said there were more areas such as closer business-to-business links, and links between the universities and civil societies that the two countries could further explore to deepen the relations.

The Australian Ambassador expressed her country’s commitment to working with the Ghanaian government to deepen further the strong relationship between the two countries.

On his part, President Akufo-Addo congratulated Bernice Owen-Jones on her appointment and added that Australia and Ghana have had an excellent relationship since the latter’s independence, 65 years ago.

He said as members of the Commonwealth, Ghana and Australia had shown commitment to the goals of the association and shared common aspirations and commitment to democratic values, and respect for human rights, which binds the two countries closer.

President Akufo-Addo expressed his gratitude for the contributions Australia had made and continues to make in the country’s development journey, especially in the extraction sector.

The President added that currently, there were 26 Australian companies in Ghana that were listed on the country’s stock exchange.

President Akufo-Addo said Ghana finds her partnership with Australia “very useful and beneficial” and that there was a very promising engagement that the two countries could enter into to further deepen the relationship.

Swiss High Commissioner, Simone Giger told President Akufo-Addo that “I think I do not have to convince you of the excellent relations between Switzerland and Ghana as your state visit to my country was a testimony of that great relations.”

She said President Akufo-Addo’s leadership which has further cultivated a renewed bond of friendship had been key and hoped the bilateral relations, as well as the high-level engagements between the two countries achieved over the past few years, would be maintained.

Simone Giger said Switzerland had recently adopted a strategy on Sub-Sharan Africa, the first ever which demonstrated her country’s willingness to engage more with Africa.

And within that strategy, she said Ghana had been defined as the “so-called Lioness” and with its presence in Ghana, Australia would want to intensify the already long relations with Ghana.

She was convinced that every development and economic engagement that the two countries pursued was in line with the Ghana Beyond Aid Agenda.

“Switzerland is here to work together with Ghanaian counterparts to develop the local private sector to diversify the Ghanaian economy and in the end hopefully, to create jobs for the country’s youthful population,” Simone Giger stated.

Other areas of cooperation that her country was ready to be deeply engaged in were Education, finance, technological know-how, digitalization and the fight against climate change.

She said the Republic of Ghana and the Confederation of Switzerland 2020 signed a landmark bilateral agreement on Climate Protection that would allow the two countries to implement the agreed cooperation under Article 6 of the Paris Agreement.

Simone Giger said though the implementation had not yet started, it had already raised a lot of interest “and I think what we are going to do under this agreement would be of great interest not only to our two countries but to many more countries.

“I am keen and eager to work together with your administration on the realization of this agreement and also towards dissemination, hopefully, of all the good pipes we are going to create.”

She said Switzerland would hope to rely on the President’s expertise and experience “and given our like-mindedness, I think we would find different topics on which we can vote together to prevent conflict, sustaining peace and also in addressing the issues of climate change and security.”

President Akufo-Addo said Ghana and Switzerland have a good base to forge ahead even stronger relations, a relationship he said has been “beneficial and productive for us here in Ghana.”

He said Ghana continue to cherish that relationship and hoped that “during your time here as Ambassador we will see an intensification of this relations.”

He expressed optimism that the Climate Change agreement between the two countries could be a model for many countries on how to work in a structured manner to deal with the socio-carbon credits over the environment.