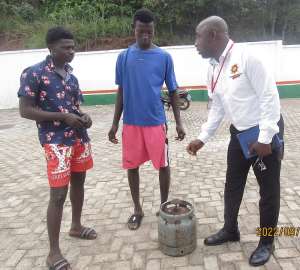 Assistant Divisional Officer Grade II, Briamah Imoro of the Bono East Regional Command of the Ghana National Fire Service (GNFS) has noted that filling a defective gas cylinder is just like triggering a bomb, “once you trigger the next reaction is an explosion and warn against the practice…don’t fill any defective gas cylinder”.

ADOII Imoro gave the warning during a field trip to LPG Filling Station at Techiman as part of a training programme initiated by the Environmental Protection Agency (EPA) which forms part of the efforts to license Liquefied Petroleum Gas (LPG) Pump Attendants to reduce gas accidents at LPG filling stations.

The EPA has therefore rolled-out initial processes towards the licensing regime which requires that every LPG Attendants must go through “Environmental Safety and Best Practices Training (ESBPT),” under the tutelage of the agency, which was monitored by the Communication for Development and Advocacy Consult (CDA Consult) in Techiman.

ADOII Imoro who stopped two young men from filling a defective Gas Cylinder at a Station at Techiman advised the public to regularly change their defective rusty Gas Cylinders.

He also cautioned LPG Pump Attendants from filling defective cylinders as it has the potential to cause an explosion.

Meanwhile, ADOI Victor Diawou, also of the GNFS Bono East Regional also explained that shaking and rolling filled gas cylinders on the grounds could trigger an explosion, gas cylinders cannot hold pressure due to high temperature as a result any excessive shaking, could lead to an explosion and an imminent fire outbreak.

He said one major cause of fire outbreaks in the country was from the kitchen, usually from gas explosions saying that, it was important keeping the cylinder upright in a ventilated area with the seal removed.

“We advise that you don’t fill the cylinder to the brim, and avoid rolling it on the ground before putting it in the car boot because it can easily explode and cause a fire outbreak,” he said.

On the usage of Gas Cylinders, he explained that it was not advisable to keep even the empty cylinder horizontally it must always be in an upright position; “if the cylinder must be put in the car boot, it must be supported with something to keep it upright at all times”.

Mr. William Hayfron-Acquah, EPA Acting Director Field Operations in an interview explained that the ESBPT syllabus has been divided into phases.

He said the training involves theoretical classroom and practical field training leading to the award of an initial certificate of participation, after which the attendants would be monitored for adherence to best practices.

The Attendants would again go through another theoretical classroom and practical field training at the end of which he or she would be license to operate as a Certified Professional LPG Pump Attendant.

Mr. Hayfron-Axquah explained that enrolling into the first phase which is classified as the Transitional Period is voluntary, but after the period it would become mandatory for every attendant to acquire the Certified Professional LPG Pump Attendant license before employment.