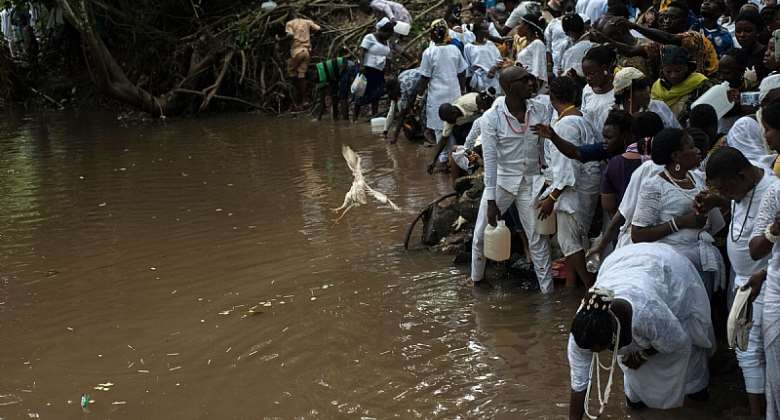 The Osun River has become turbid and unsafe for consumption - threatening its cultural and biodiversity significance. Photo by: Stefan Heunis/AFP via Getty Images. - Source:

Pollution has become a worrying threat to Nigeria's Osun River. The river supports millions of people who rely on the water for agriculture as well as industries. It is also an integral part of Nigeria's treasured Osun-Osogbo sacred grove, a UNESCO world heritage site. Emmanuel O. Akindele unpacks what's causing the pollution, what harm it's causing and what must change to preserve the river's biodiversity.

How important is the Osun River to Nigeria?

The Osun River is one of the major rivers in southern Nigeria, draining into the Gulf of Guinea . The river takes its source from Ekiti State. But it's culturally linked to the ancient city of Osogbo . A stretch of the river that flows by a sacred grove in the ancient town of Osogbo has been designated a UNESCO World Heritage Site due to its cultural significance. It is one of two such designated sites in Nigeria .

The river provides a wide range of cultural ecosystem services such as natural scenes for eco-tourists and the site for filming Nollywood movies. A large number of foreign tourists visit the river each year. The visits are either to pay homage to the river goddess (Osun) or to join others in celebrating the annual Osun festival .

The river also has enormous environmental value given its rich biodiversity . It supports plankton , snakes and endangered plants . Osun River is one of the last remnants of primary high forest in southern Nigeria - UNESCO World Heritage Site. But pollution is threatening the river. from www.gettyimages.com

Along its whole course, the Osun River also plays a critical part in supporting the livelihoods of people. In many areas of Osogbo and Osun State, it provides irrigation for nearby farmlands. A significant number of abattoirs are also situated close to the river bank along several stretches of its course.

The Osun River flows through other human settlements in southwest Nigeria as well as the historic city of Osogbo.

What are the main sources of the pollution?

Heavy metals also pollute the river. Heavy metals like gold, mercury and cadmium occur naturally in the Earth's crust. But they can also be introduced through domestic and industrial wastes, or atmospheric sources. Heavy metals can be amplified by human activities like waste deposition or mining. Mining loosens heavy metals buried in the earth, adding more of them to water.

Artisanal gold mining within the catchments of the Osun River, especially around the Ijesha land area of Osun State, have further worsened the ecological condition of the river and made the water unsafe for human use.

The impact of illegal gold mining on the river cannot be over-emphasised. First, the impacts have been felt on the river's water quality, which has deteriorated. This has grave implications for its biological diversity .

Aside from the introduction of toxicants, the river, which was once transparent enough for photosynthetic production, is now very turbid (cloudy) with a characteristic gold colour. At extremely low water transparency, a river's phytoplankton primary production could be threatened , and by implication, its secondary (fish) production could also be threatened. It can also cause fish to die by blocking their gills and destroying their reproductive sites. Osun river pollution. Credit: UrbanAlert,

Another source of pollution is human-generated waste that lands up in the river. This is due to poor waste management practice – a feature common in many urban areas in Nigeria.

What are the solutions?

The government must first halt all mining near the river until environmental audits have been conducted, placing urgent human welfare ahead of short-term economic gains. Although the river has already suffered significant harm, it is still possible to halt mining operations so that toxicant concentrations do not keep rising and the river can recuperate from the stress of pollution.

Through natural processes, rivers and streams have the ability to purify themselves. However, in the instance of the Osun River, this can only happen after the various sources of pollution are stopped.

If further gold mining operations are suggested following an environmental audit of the Osun River, it will be crucial to reroute effluents from all natural waters in the basin. A special reservoir can be constructed in a location far away from where people live and make their living.

You’ve been a dependable husband – Lordina celebrates Mahama...
29 minutes ago