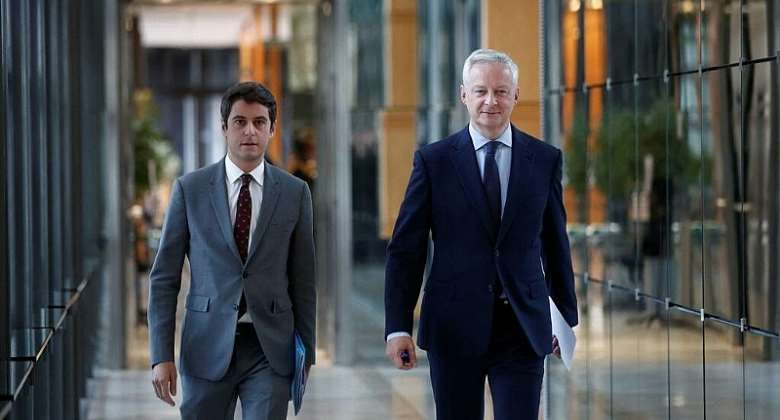 The government has promised to protect ordinary consumers from the worst effects of the energy crisis, at the cost of record borrowings of 270 billion euros. Press and political reaction has been broadly negative.

The budget proposals are likely to face muscular opposition in parliament, where President Macron's centrist party and its allies lost their absolute majority in elections earlier this year.

The government is expected to have to use the constitutional mechanism known as "article 49.3" which allows the executive to force essential laws through parliament without a vote.

Prime Minister Elisabeth Borne has yet to decide how to handle the parliamentary treatment of pension reforms intended to increase the official retirement age from 62, one of Europe's lowest levels.

The quickest option would be to include the changes in the budget bill for the social security system legislation which is set to be voted in October.

Others, including ruling party ally François Bayrou, argue that pension reform is too important to rush and should form a separate bill that can be debated on its own merits.

Opposition parties from the left to the far-right have vowed to oppose the pension changes. A nationwide strike has been called by the influential CGT union this Thursday.

A crying need for political courage

An editorial in centrist daily paper Le Monde says the problem is not the amount of money which the budget will make available, but rather the targeting of government spending.

"We need to spend better," says Le Monde, pointing to the crucial importance of expenditure in such areas as restructuring public services and ensuring that the energy crisis does not obscure what is at stake in the battle against climate change.

The same editorial points out that the French public debt is a few centimes short of 3,000 billion euros, and that financing state borrowing is not getting any cheaper.

It is time, says the centrist paper, for the government to show political courage and economic intelligence. Otherwise, the weight of the state's borrowings will drag France into unknown but certainly dangerous territories.

Right-wing Le Figaro says the budget has no logic or clear direction. What is the point, Figaro wonders, of taking on thousands of new civil servants (11,000 jobs are proposed) when the state will have to borrow massively to pay their salaries?

Left-leaning Libération ironically welcomes the budget, sayoing the government mantra has gone from "whatever it costs," used to encourage struggling businesses at the height of the Covid crisis, to "how much does it cost?" a reaction to the dark days ahead.

Libé notes that the political right has condemned the budget as further proof that the government has lost control of state spending. Opponents on the left continue to call for a supertax on the profits of some of France's major industrial players.