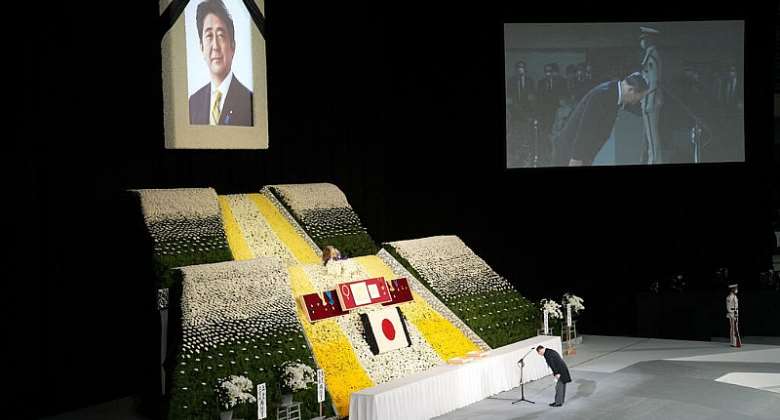 US Vice-President Kamala Harris and world leaders including Indian Prime Minister Narendra Modi and Australian premier Anthony Albanese were also among those in attendance at the Budokan venue in Tokyo.

However, amid a cooling of diplomatic relations, China chose to send a representative rather than a high-ranking member of government.

Abe's ashes were carried by his widow Akie, who was met by a a 19-gun salute sounded in honour of the slain former leader.

In a eulogy, Prime Minister Fumio Kishida described the politician as a "person of courage", listing his achievements, including efforts to strengthen Japan's diplomatic ties.

Outside, thousands of people stood in line as the ashes arrived, waiting to deliver flowers and say a prayer in two mourning tents.

Japan's emperor and empress did not attend, as neutral national figures, but Crown Prince Akishino and his wife led mourners in offering flowers at the end of the 90-minute service.

Abe was Japan's longest-serving prime minister and one of the country's most recognisable political figures, known for cultivating international alliances and his "Abenomics" economic strategy.

He resigned in 2020 over recurring health problems, but remained a key political voice and was campaigning for his ruling party when a lone gunman killed him with a homemade weapon on 8 July.

But the decision to give him a state funeral - only the second for a former premier in the post-war period - has provoked opposition, with around 60 percent of Japanese against the event in recent polls.

Thousands have protested the ceremony and a man set himself on fire last week near the prime minister's office, leaving notes reportedly expressing his objection to the event.

Some protesters gathered at the funeral on Tuesday. "Stop fascist state funeral," read one sign held by a protester in a nearby demonstration.

Some lawmakers from opposition parties chose to boycott the funeral.

Outside the parliament, thousands of mostly older activists, many waving trade-union flags, used loudspeakers to denounce the event, Abe's record, and the government.

The controversy has several causes, with some accusing Kishida of unilaterally approving the funeral instead of consulting parliament, and others resentful of a nearly €12 million price tag.

It is also the legacy of Abe's divisive tenure, marked by persistent allegations of cronyism, and opposition to his nationalism and plans to reform the pacifist constitution.

Kishida's government may be hoping the solemnity of the event, attended by an estimated 4,300 people including 700 foreign invitees, will drown out the controversy.

The last major visit to Japan by a French president was in 2019, when Emmanuel Macron held bilateral talks with Abe amid strains in their alliance over the arrest of former auto tycoon Carlos Ghosn who once led an alliance of Japan's Nissan and Mitsubishi Motors and France's Renault.