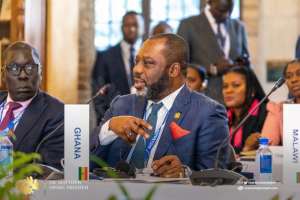 Hosted by Mayor Sylvester Turner, discussions explored Africa’s hydrocarbon industry exploration and expansion, the challenges of African countries securing funding and investment and what African countries can do to attract big oil and gas companies to exploit resources for mutual benefit.

The meeting also looked at renewable power generation and various innovations including carbon capture and storage, all within the overarching context of the current energy transition.

During discussions on decarbonization, the minister remarked that Africans are yet to enjoy the benefits of their oil and gas resources, therefore as leaders, they are going to mindfully engage in cleaner ways of exploiting the hydrocarbons, with assistance from carbon capture technologies.

He narrowed this to Ghana’s current quest to see investors invest in E&P acreages and farm-in opportunities as well as the numerous opportunities in the power sector.

As African energy decision makers, the minister was hopeful that, in the interest of their respective citizens, they shall all derive maximum economic benefits from the God-given resources.