Judiciary must be genuinely independent – Afenyo-Markin 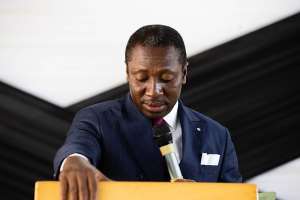 The Deputy Majority leader of Parliament, Mr Alexander Kwamena Afenyo Markin, has said judiciary must not only profess independence but must genuinely be independent.

Addressing the 6th Law Week Celebration at the 7th Legal Luminaries Conference of the Faculty of Law, University of Cape Coast, Mr Afenyo-Markin said the judiciary should also act and function independently from outside influences that may corrupt or curtail its ability to administer justice fairly.

He noted that although the 1992 constitution gives the President the authority to appoint judges to the highest courts, article 125, 127 expressly grants the judiciary the freedom to carry out its functions without interference.

On his part, Mr Solomon Faakye, the head of legal affairs, UCC, said the appointment of judges by the president would continue to be the case as long as the constitutional clause which grants the president the power to nominate judges is not amended.

He added that Ghana must decide whether it is prepared to allow this system to continue or to give the Chief Justice the authority to make the appointment as it is in other jurisdictions.

Mr Faakye, however, said there are instances where judges chose do not follow the wishes of the person who selected them; otherwise, "we would give the impression that judges are always influenced by other political factors."

The purpose of the forum was to assemble legal minds to help choose some sustainable tactics and solutions to help address some seaming conceptions of judicial independence as a result of several reports in the media that appear to damage the integrity, neutrality and independence of judges.