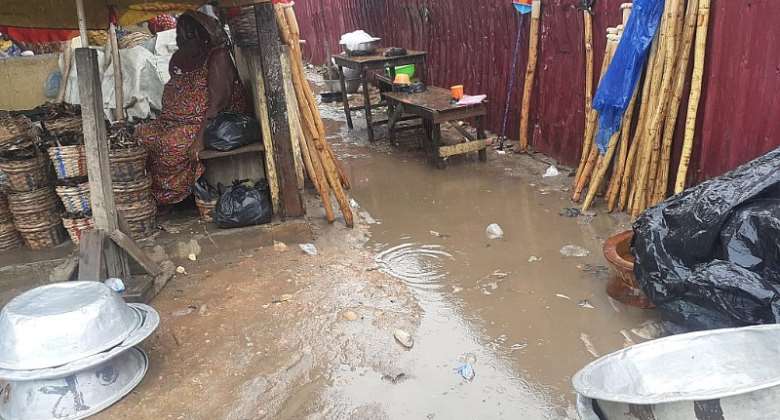 Traders at the Tuesday market in Accra have appealed to authorities to refurbish the market to ensure the health and safety of sellers and buyers and to provide more market spaces.

According to the traders, the deplorable state of the market has affected sales, losing their customers by the day.

The Tuesday market is located at Korle Gonnor, a suburb of Accra, under the Accra Metropolitan Assembly. It is one of the oldest markets in the capital, having existed for decades.

Although the market operated every other day, Tuesdays were observed as market days when many traders troop in with their wares to make good sales.

The market was mainly seen as a hub of smoked fish and seafood, notably shrimps, herrings and many other types of fish as well as other consumables.

Customers who visited the market are greeted by traders with foodstuffs right from the streets and entrance of the market due to the lack of space for the traders.

A recent visit by the Ghana News Agency (GNA), saw the Tuesday market in a deplorable state, with inadequate sheds to accommodate the huge numbers of traders.

For decades, the market has faced the challenge of flooding anytime it rained with the entire market becoming messy, leaving traders and customers no option but to wade through the flood waters to escape the dangers that may lie ahead.

A portion of the market has been covered for construction, however, work has stalled for about four years, according to the traders, resulting in low sales which have become a source of worry.

Madam Lebene Okeji, a smoked fishseller at the market, said they had been managing with the deplorable state of the market until the place was earmarked and covered for the construction of sheds which had not materialised.

She said: “we are suffering over here, we are scattered all over without a proper place to trade. Our customers do not find the market attractive anymore and we keep losing them.''

Other traders facing similar challenges said reptiles in the covered and weedy area often invaded the space and wares, describing the situation as disturbing.

Elizabeth Okailey Akrong, Market Queen said traders had endured the challenges for the past four years but could no longer bear the inconvenience as well as the health implications and called on authorities to intervene to help put the market in good shape.

Meanwhile, the Accra Metropolitan Assembly (AMA) says it is redeveloping the various markets in the Metropolis.

In an interview with the GNA, Mr Gilbert Nii Ankrah, Head of Public Relations (PR), said the Assembly would see a redevelopment of all markets within its jurisdiction, targeting the markets one after the other.

The Head of PR at the AMA said the assembly was aware of the peculiar challenges within the Tuesday Market, adding that efforts had been put in place to ensure some rehabilitation of the market.

He added that with the recent redevelopment, other markets including the Tuesday Market would benefit from the redevelopment project while assuring traders of the mayor's commitment to ensure that there is a conducive environment at the markets to do their business.

“As and when that one is done, the Assembly will then move to other markets that are not in good shape and we are looking at the Agbogbloshie market that has even come into the picture. The mayor has met all the market Queens within these various markets and the recent meeting was about a month ago to even let them know of plans to rehabilitate the market, their plans, and challenges as well,”

“So, I can assure you that the Assembly will move in to ensure that the Tuesday market, especially the sheds, that are not in good shape are brought back to good shape to encourage trading activities within that enclave,” Mr Ankrah said.

Mr Ankrah said, the portion of the Tuesday market earmarked was a project being undertaken by the Coastal Development Authority (CODA), which would complement the AMA’s redevelopment project, however, he could not state the reasons for its stalling for the past four years.

“I can say that the Tuesday market will see some improvement very soon. As part of efforts to redevelop the market, the Coastal Development Authority has come in to work on some markets within the Metropolis. We know of one project within the Tuesday market. In as much as the project has stalled, we are hopeful that when it is completed it will serve its purpose.”

He said work had commenced in some markets, indicating that a few months ago, about 500 traders benefitted from the commissioning of Shed 2 of the Makola market by the Assembly after previously commissioning phase one of Shed 1 within the Makola space as part of the market's redevelopment project.