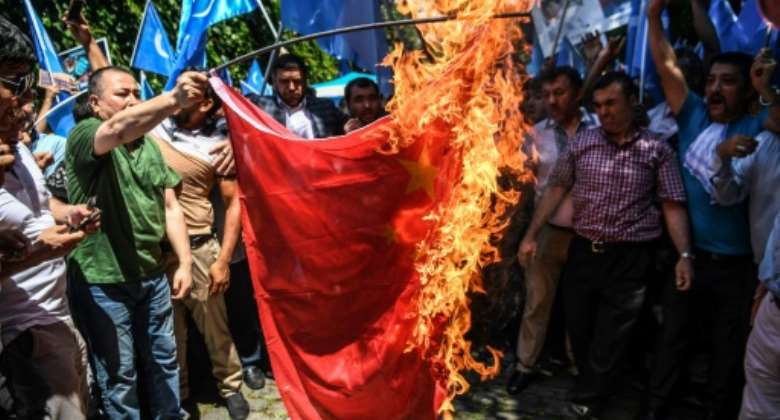 Supporters of the mostly Muslim Uyghur minority and Turkish nationalists burn a Chinese flag during a protest. By OZAN KOSE (AFP/File)

The UN Human Rights Council in Geneva frequently investigates and tries to rein in abuses inside countries but has not taken on the two heavyweights directly until now.

A damning UN report warning of possible crimes against humanity in China's Xinjiang region, and concerns over an intensifying crackdown inside Russia as its war rages in Ukraine, have led to massive pressure on the West and its allies to act.

Western nations have taken unprecedented steps against the two giants, despite fears that a failed resolution would signal a shifting power balance and weaken the 47-member council.

Earlier this month, all European Union countries except Hungary agreed to draft a resolution urging the rights council to appoint a so-called special rapporteur to monitor violations inside Russia, in a move Moscow slammed as "politically motivated".

And on Monday, the United States presented the first-ever draft resolution focused on China at the council, seeking "a debate on the situation of human rights in the Xinjiang Uyghur Autonomous region" during its next session.

The draft text, co-sponsored by Britain, Canada, Sweden, Denmark, Finland, Iceland and Norway, with others expected to join in, will be voted on by the council next week.

"As innocent as it looks on the surface, this is pretty significant... It places China on the agenda of the council," a diplomatic source told AFP.

During a general debate on Monday, a long line of countries voiced concerns about China and Russia.

"We can't ignore such severe and systematic breaches of human rights," British Ambassador Simon Manley said of the situation in Xinjiang.

"This council cannot, must not, stay silent."

China is facing intense scrutiny after the UN's Xinjiang report was published on August 31 highlighting "credible" allegations of widespread torture, arbitrary detention, and violations of religious and reproductive rights.

It brought UN endorsement to long-running allegations by campaigners and others, who accuse Beijing of detaining more than one million Uyghurs and other Muslims, and forcibly sterilising women.

Beijing vehemently rejected such charges and has harshly criticised the report.

'Ready for the fight'

China has launched an all-out offensive since the current council session started two weeks ago, and has sent a large delegation from Xinjiang to Geneva to hammer home the "truth" about the situation.

"We are not afraid. We are ready for the fight."

He was backed by diplomats from many countries, including Pakistan, whose representative slammed "interference in China's internal affairs under the pretext of human rights."

Malawi's representative Mathews Gamadzi also appeared to back China, saying the council "has become selective and paralysed by politicisation".

Malawi was the only country out of 13 African council members which took the floor.

Gamadzi's comment could raise concerns that the African members, which often move as a bloc, might vote against one or both texts.

If a large enough number vote against them, it could tank the resolutions.