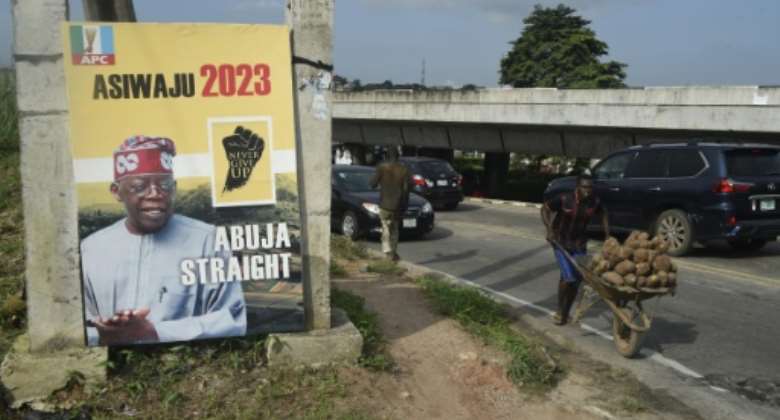 Less than five months before the ballot, no clear frontrunner has emerged with major candidates all confronting challenges on their path to the top political seat in Africa's most populous country.

Top candidates lining up are Bola Tinubu, a former Lagos governor and stalwart of the ruling All Progressives Congress or APC and opposition Peoples Democratic Party or PDP candidate Atiku Abubakar, a former vice president on his sixth bid.

Two other candidates are challenging the dominance of the APC and PDP: Peter Obi, a former state governor generating a following among young Nigerians and another ex-state governor and former minister Rabiu Kwankwaso.

Eighteen presidential candidates are lined up, including one woman for Nigeria's February 25 ballot. By Pius Utomi EKPEI (AFP)

Campaigning starts officially on Wednesday, but five months is an unusually long time for Nigeria, analysts say, increasing risks that party infighting and the north-south ethnic and religious divides will complicate the election buildup.

Since returning to democracy after military rule in 1999, Nigerian elections have often been marked by violence, delays, fraud claims and court challenges.

Voter turnout has also been generally low in Nigeria -- 33 percent in 2019 -- and the two main parties have fielded older candidates seen by many younger Nigerians as offering little change.

That has left room for third party candidates to tap into growing anti-establishment feeling in what analysts see as a highly competitive electoral race.

There are 18 presidential candidates, including one woman. Voters will also elect Senate and Congress lawmakers in the February 25 ballot.

"Unlike the previous six election cycles, the 2023 vote is not likely to be the usual two-horse race," said Dapo Thomas, history and political science teacher at Lagos university.

Nigeria's constitution requires candidates to win a simple majority and 25 percent of the vote in two-thirds of the country, a nod to the ethnic and religious makeup.

North Nigeria is predominantly Muslim, the south is mostly Christain and there are more than 200 ethnicities, the largest being Yoruba, Hausa/Fulani and Igbo.

In an unwritten, power-sharing agreement known as "zoning", the presidency has also traditionally rotated between north and south.

After two terms under Buhari, a Muslim from the northwest, it was widely expected major parties would select a presidential candidate from the south.

But the PDP broke with zoning by naming Atiku, a northern Muslim. APC also broke with practice by going with a Muslim-Muslim ticket. Tinubu is a southern Muslim and his vice president candidate Kashim Shettima is also a Muslim.

The APC says Tinubu's time as Lagos governor shows his political experience. But the ruling party must contend with discontent over management of the economy and tensions over its Muslim-only candidates.

The Labour Party hopes Peter Obi's message as an alternative to main parties will win votes. By Kola Sulaimon (AFP)

But the PDP is struggling with a major split. Atiku's victory has upset a core part of southern supporters, including Rivers State governor Nyesom Wike, an influential PDP stakeholder who has broken ranks.

PDP and APC "are dealing with quasi existential issues of their own, and important political and vote mobilisation blocks which are disaffected," SBM Intelligence analyst Ikemesit Effiong said.

Obi's campaign hopes their candidate can keep up his early momentum as an alternative. But his Labour Party does not have the political structure to match the APC and PDP nationwide.

"The 2023 general election will be a really difficult but seminal point in Nigeria's evolving experiment with democracy," SBM's Effiong said.

"It has the hallmarks of ending well or ending really badly."