An essay of war, madness and addiction by photojournalist Eugene Richards 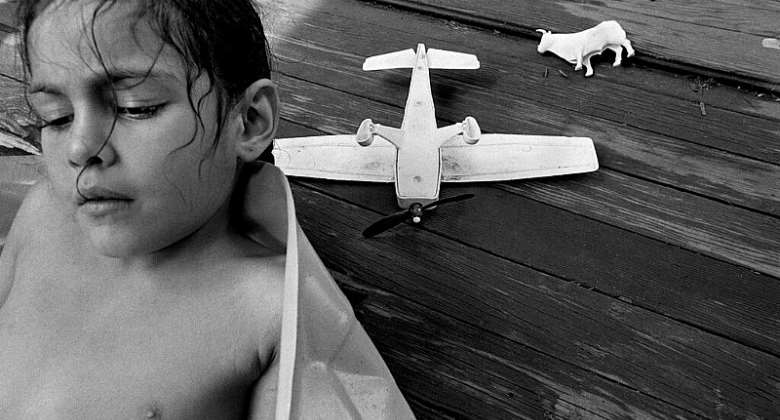 The work of award-winning American photographer Eugene Richards was recently the subject of a retrospective at the international photojournalism festival, Visa Pour l'Image. The 78-year-old has documented poverty in the US, photographed drug addicts, patients in psychiatric hospitals, Iraq war veterans. His exhibition is called "An Outsider".

Why is your exhibition called "An Outsider"?

Eugene Richards: Like all of us, I was having a very difficult year with the Covid illness, all the wars, the Ukrainian war, and in America the politics getting so awful … I was pretty down and I didn't know what to do.

Also I'm an older photographer, so there's not much work. It was my son who said to me: "Be quiet, let's post your work up on Instagram."

I never did Instagram so we started. Very grudgingly, I went through the work of the past.

I didn't want to. I always do books. I do books to get something finished so I don't have to look at it again. So it was very different for me to go through 50 years of work and kind of painful, very difficult to do because it's so full of memories and people who are gone, all kinds of questions.

But as I was going through the photos, my son was asking me all the time, he said: 'How come this wasn't published? You did something about gay parenting that was not published. You did this and that wasn't published.'

I realised that, all my life, I was a little bit out of sync, out of balance with what journalism was. So the work I got out in books, but it wasn't very much in demand.

And the question to keep going in this day and age, there's always the question all the time, are you the right person to do the story?

You're not a woman. So can you tell the story of women? How can you?

You're not a black person, how can you tell the stories of black people? You're not impoverished in Africa.

But you are always an outsider and you begin that way.

There's never the illusion that you are the person you're photographing.

I photographed many births. Obviously, I'm never going to experience the pain of it. But I can be curious about it and I can report on it.

So that's the outsider.

When did you start photojournalism?
When I was in college, I started writing text journalism. And then what changed my life was actually the Vietnam War. I avoided the draft, I became against the Vietnam War.

I was waiting to go to prison … they were gonna come and get me.

So I followed some photography classes in Boston. But then what changes? I ended up going down to south Arkansas, stayed in the United States as a social worker, as a Volunteers in Service to America.

There I began to work with very poor people. Hunger was very real, impoverished sharecroppers.

And I felt that part of my job was to do my day-to-day social work, but also to record the situation so maybe we could raise money to help people.

That was my very first journalism in Arkansas. And that would have been in 1969.

What about your photo series in Dorchester where you were born? There are several images in this exhibition?

When I came back from the South, it was kind of funny because I couldn't get a job. I did day work, I worked in a meat factory, a slaughterhouse, other jobs.

I started taking the camera. I wanted to take more photographs. So it was the neighbourhood I was a little boy in. I left there when I was 12, and I was living there again with Dorothea, who was my first wife, who I lost later.

I started wandering around the streets. It was my neighbours, the people who live there. The closest to journalism was ironically, Boston, which historically is a very racially divided city, class divided.

So I ended up doing stories about the racism and the school bussing and so forth. It was quite a body of work. Strangely, I never thought about being a professional journalist.

That body of work ended up in the Magnum agency and other places, and then people asked me if I wanted to do assignments. So that was the beginning for me.

What do you mean when you talk about 'journalistic changes in America'?

I think I got in a little trouble for that. Well, there's the issues I'm talking about. It's being spoken about all the time, about your right to cover certain stories.

And I think it's very discouraging to me, to the general population …  there's so many female photojournalists today, more and more, and, in a way, they're being told that they can't tell the lives of men. Of course they can, maybe better than the men themselves.

So that's one change. Another change is, at least in my mind, very often what we call photojournalism is portraiture, very formal.

The only reason it bothers me… if I did a portrait of you now, my caption would tell me that you're a journalist, that you're a reporter. But will the picture necessarily tell me anything about you?

So that's what's happening to me. I see more and more photojournalism becoming illustration. Magazines will hire you with a point of view.

In America, on television, there is no news anymore. It's all point of view. It's opinion.

And that's happening, I feel, in photography too … very often when I do stories, I go out there and they find out my opinion is wrong.

You suggest that some photos are deliberately staged, set up?

Yes, I think I've seen a lot of stories where they make it very clear that … there's even a movement where people say: 'There's no truth anymore, so why bother?'

And so they organise the pictures 'to look like'… And if you looked at it, you would think it was photojournalism.

And then they tell you later: 'No, it's art photography' which is very popular because people feel that 'Art' is from what you feel about things, while journalism is supposed to be about the facts, which, of course, we know is not the truth either.

It's a combination of the facts plus what you're feeling which is photojournalism.

So more and more photography, I feel, is organised, rather than of the moment.

Why are most of your photos are in black and white?

I began in black and white and loved the process of the printing and that kind of thing. And the last couple of years, I've used the digital camera.

I've done this project, but I've done other projects, actually I did a project of kind of informal portraiture in a way. They're not portraits, but they are moments that could be called portraits.

There's a picture actually in the show of this young soldier back from Iraq … Thomas Young is his name. When I went to see him the last time, Thomas was considering committing suicide.

He was so damaged over the years. And when I went into his room to photograph him, he was in a dark room. It was dark blue. And he had a Batman decal, a big black and blue decal.

If you look at that picture in colour, it's a totally different mood because he considered himself, as he said, he had become a Batman-like character. People called him a hero. But he'll never see the light again because of his illness. So the dark blue colour became very important to the mood of the picture.

Sometimes the colour was very important. So I've done both … actually I did a long series of stories on abandoned houses in America, which is all in colour. In black and white they didn't mean the same.

I mean, you'd find a bar of bright pink soap in somebody's bathroom and a bright pink soap is like a planet in a way, like Mars. So the colour is very important. But this show, I kept it totally in black and white.

You produced a series entitled "War is personal" in 2009 about the human consequences of the Iraq war. War is still a terrible reality?

I think these photos are very important for now. The trouble I have with them is in ten years, we will forget these … like in America, people don't know the Iraq war went on.

A million people dead. Our president Bush now makes paintings and he goes to cocktail parties and his people give him a round of applause. He began a war that had no reason and people forget.

And now with Ukraine, we totally focus on what we should be. But sometimes I think we have to really look at the larger, long-term picture of what this is going to do to the world.