Why Was Togbega Afede Not Invited To The Queen’s Funeral? 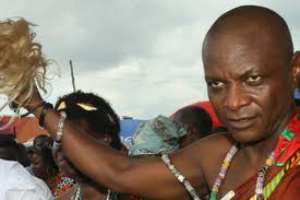 Recently, I read comments from a section of ignorant Ghanaians, including a presidential staffer Samuel Buabeng, asking why Agbogbomefia Togbega Afede XIV was not invited to the funeral of the Queen of England. This is the latest in a series of silly questions by people who are eager to display their ignorance in the direction of Ewes without bothering to learn a bit of history. I feel a duty to educate Mr. Buabeng and his ilk in this regard.

Ewedome-that part of Ewelan comprising Asogli (Ho) and Akpini (Kpandu) had little historical dealings with the British; This area, together with modern Togo, was a GERMAN COLONY. We only became a British PROTECTORATE (not colony!) after Germany was defeated in the First World War. We never traded in slaves with the British, neither did we fight any war against them. We were part GERMAN TOGO (not GOLD COAST) which was later Split into East Togo (now republic of Togo) and West Togo (now part of Ghana). Hence, OUR CULTURAL AND HISTORICAL TIES LIE WITH GERMANY, not UK.

Even though we allied with the British to defeat Asante in the Sagrenti war in 1872-74, our friendship with the British only took off when our relationship with Germany went sour. In 1914 when Togbega Dagadu was exiled to Cameroun by the Germans, it was the British who freed him and brought him back to Kpandu after defeating Germany in Cameroun during the second World War. That was when Togbega Dagadu wrote a letter to the Queen, stating his support for the war against Germany (Togbega Dagadu’s letter is quoted in the New York Times, see Laumann 2009) and gravitating Ewedome towards Britain.

Asante, on the other hand, was perpetually a BRTISH COLONY and had more historical dealings with the British than any other tribe in Ghana. Indeed, it was Britain who eventually destroyed the Asante kingdom and restored it later as a confederacy, for the purpose of indirect rule. It makes perfect sense, therefore, for the Asante chief to be invited to the funeral of his historical overlord.

Similarly, the Queen of Denmark, Margarethe, visited Akwamufie in 2017. This had nothing to do with Akwamuhene being more important than other chiefs in Ghana but with the fact that Akwamu and Denmark had intimate dealings in precolonial times. Should this Queen die one day, it’s most likely Akwamuhene would be invited, and not any other king in Ghana. Again, it would be foolish to assert that this is an indication of the superiority of Akwamuhene over other chiefs.

If Germany had a monarch who died and Togbega Afede were not invited, that would have made for better (albeit still useless) comparison. And even then, such an invitation would have most likely gone to the titular head of Eweland, Togbega Agboli Agorkorli, Ewe paramount king of Togo and life time president of the Togolese National House of Chiefs.

More importantly, we Ewes do not measure the greatness of our chiefs by how many high profile funerals they attend, instead, by the services they render to their people and their contributions to making the world a better place. In this regard, Agbogbomefia is unrivaled.

Togbega Afede served on the Board of the Word trade Centre. That alone, to us Ewes, is by far a greater source of pride than going to visit the decaying corpse of any Western colonial monarch.

Samuel Buabeng, take time off your duty as presidential staffer and read some history, for it is better to confess your ignorance and learn than to display it.