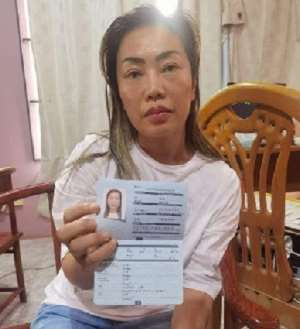 The sudden fixation of the leaderships of the country’s two major political parties, namely, the ruling New Patriotic Party (NPP) and the main opposition National Democratic Congress (NDC), on the at once scandalous and nationally embarrassing matter of the infamous Chinese Madam and Galamsey “Queenpin,” Ms. Aisha Huang, leaves much to be desired (See “Aisha Huang Trial: Ghana Immigration Service Has Questions to Answer – CDD” Starrfm.com.gh/Ghanaweb.com 9/16/22). This story, of course, regards the widely announced deportation of the notorious Chinese-born illegal small-scale mining cutthroat, nation-wrecking predator who was also widely alleged to have been causing massive havoc in the country, including the criminal use of hired goons which she readily used to eliminate any rivals or competitors, both native born Ghanaian citizens and foreigners, perceived to be obstructing the entrepreneurial success of Ms. Huang Ruixia. Well, now, as it turns out, Ms. Huang was never deported or repatriated from Ghana at all, pontifical pronouncements at the time by highly placed cabinet and executive appointees to the contrary notwithstanding.

At any rate, the very first time that I learned about the protagonist of the present column was during the tenure of the late President John Evans Atta-Mills-led government of the National Democratic Congress (NDC), of which the now-former President John “European Airbus Payola” Dramani Mahama was the substantive Vice-President. At the time, Ms. Huang was widely reported to have built a humongous databank of johns or sex-soliciting highly placed government officials of cross-partisan stripes and shades. Which means that Ms. Huang had been in the Courtesan, Demimonde or Madam business since the officially sanctioned influx of Chinese migrants and immigrants into the country under the tenure of the late President Jeremiah “Jerry” John Rawlings-led government of the National Democratic Congress, through the John Agyekum-Kufuor-led government of the Danquah-Busia-Dombo-inspired New Patriotic Party into the present.

Some narratives also claim that Ms. Huang entered the country in her late teens and was for some time, an unofficial aide or employee in some nondescript capacity at the Chinese Consulate in Accra, where the subject of this column worked as a liaison between the latter diplomatic establishment and new Chinese arrivals in the country, in some sort of capacity approximating that of a coordinator of a Chinese immigrant settlement program. Now, whatever the real case scenario may be, it was clear from the beginning that Ms. Huang was a veritable part and parcel of the Galamsey Menace whose immediate and definitive decommissioning from active participation in the environmentally predatory and wantonly destructive illegal small-scale mining industry was both imperative and apt to redound to the great and invaluable benefit of the country, especially in the critical and vital area of the radical reclamation of our landed and forestry resources and the cleanup of our heavily polluted hitherto pristine waterbodies and riverbeds.

Now, this is where the four, or so, years during which this putative female “Chinese Menace” or vermin was allegedly out of the country must me measured or reckoned, in terms of any appreciable impact that Ms. Huang’s absence from the battleground, as it were, might have had on the government’s purportedly radical attempt to eradicate Galamsey and restore the country’s polluted ecological system to a livable balance. The real problem here, though, is that any scandalously lame attempt to scapegoat Ms. Huang for a problem that both governments of the National Democratic Congress and the New Patriotic Party have more than amply demonstrated not to either have the requisite capacity or the willpower, or a combination of both, to effectively and definitively resolve must be envisaged will not was or fly, as it were.

And this is precisely what appears to be happening right now. And the picture, to say the least, does not look good. It does not look good or pretty because our leaders have gone from a “Zero Tolerance” for Galamsey which, for quite a considerably while entailed the total ban or prohibition of all small-scale mining activities in the country, to the catastrophic and counterproductive announcement, as I vividly recall with great sadness, by the present occupants of Jubilee House, that is, the Presidency, that small-scale mining was a perfectly acceptable industrial activity and practice all over the globe which needed to be strongly encouraged as a viable job-creation mechanism and avenue, curiously and egregiously ignoring the fact that the deleterious impact of Galamsey on Ghana’s environmental resources was dire and unique in ways not witnessed anywhere else, either on the proverbial primeval continent or the wider global community at large.

Now, the fact of whether, indeed, Ms. Huang had left the country at the time that, according to her lawyer, Capt. Nkrabea Effah Darteh, the Attorney-General and Minister of Justice allegedly barged into the chamber of Accra High Court’s Criminal Court Room One and entered a plea of “Nolle Prosequi,” or the discontinuance of proceedings in the case of the indicted Ms. Huang, does not seem to mean anything one way or another. What means or matters more than anything else is what the Akufo-Addo Government has to show for its efforts, by way of any tangible or positive results in its pontifical declaration of putting a definitive end or conclusion to the Galamsey Menace. Thus far, the forensically provable evidence on the ground does not seem to suggest that, indeed, but for the criminally wanton sabotaging of the battle against Galamsey by Ms. Huang, this problem that threatens to drive Ghana’s human life into extinction would since long have been resolved.

The recent call by Mr. Paul Abrampah, Programs Manager of the Ghana Center for Democratic Development (CDD-Ghana), for officials of the Ghana Immigration Service (GIS) to be invited by the presiding judge of the Huang trial to give evidence forensically establishing the fact of whether, indeed, Aisha Huang had left the country at the time that the government publicly announced that she had departed the country, is decidedly otiose and irrelevant, if also because as already noted above, there is absolutely no forensically credible or airtight evidence pointing to the fact of this Chinese national’s having single-handedly and single-mindedly introduced Galamsey or the illegal small-scale mining industry into the country in the wantonly destructive manner in which it has presently become since the late 1990s, that is, at precisely about the same time that the Beijing authorities gifted the Rawlings-led government of the National Democratic Congress with the multimillion-dollar National Theater edifice in Accra that, in retrospect, appears to have actually been a postcolonial Trojan Horse.