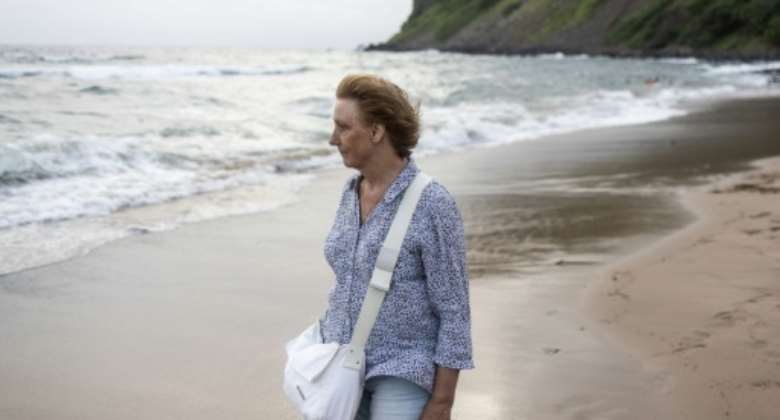 Nadine Verschatse's daughter was just 20 when she and a friend drowned in the Joola disaster. By JOHN WESSELS (AFP)

What was a trip of a lifetime for some and a day out for others ended in one of the world's worst maritime disasters, with victims' families still seeking justice 20 years on.

Nadine Verschatse's eyes mist over when she recalls the capsizing of Le Joola on the night of September 26, 2002 after it sailed into a storm off the coast of Gambia.

The tragedy has haunted the 69-year-old Frenchwoman as she continues her fight to get justice for her daughter "and all the others".

She picks up a green folder and pulls out a photograph while sitting in a Dakar restaurant.

"Look, I always keep it with me. You have to put faces to names," says Nadine looking at the photo of Claire, her daughter, a radiant 20-year-old flanked by her childhood friend Guerande.

"For their birthdays, as they'd been working hard, we gave them a trip."

The trip, to Senegal, marked the first time they had ever travelled by plane, but they were never to return.

Joola had some 2,000 passengers aboard -- almost quadruple its capacity. By - (AFP/File)

Le Joola ran into trouble on the way from Ziguinchor in the Casamance region to Dakar.

Victims' associations say more than 2,000 passengers from more than a dozen countries died after cramming onto a vessel designed for a quarter as many, with only 65 survivors.

Senegalese Leandre Coly, 37, was among the survivors.

He remembers an "apocalyptic vision," which still haunts his dreams, describing an initially joyful atmosphere onboard with some passengers playing cards, others laughing and joking as musicians played.

Then the wind picked up and heavy rain prompted the passengers to close the portholes.

The vessel tilted dangerously "and everything slid away -- instruments, the musicians, people. Water began to seep in, the lights went out. People were crying out all around", Leandre said.

Instinctively, Leandre grabbed hold of a fellow passenger and stumbled to an exit, swimming away from the stricken vessel, discarding his clothes as his strength ebbed away.

Mourners gather by containers at Dakar port holding victims after the disaster. By SEYLLOU (AFP/File)

Despite fearing he would drown, he defied the odds and, guided by the sound of voices in the darkness, found a small group holding on to an inflatable boat which they prised open.

In the early hours a group of fishermen pulled them to safety, Leandre recalls tearfully.

Nadine looks on from a separate table, giving him space to remember.

"We are a big family," she says referring to those affected by the disaster.

The causes of the incident have never been fully established, despite a Senegalese government inquiry and a French probe launched because of the deaths of several French citizens.

Engine failure, a navigational error, bad weather, poor maintenance and overcrowding -- or a combination -- were likely to blame.

Officially, 1,928 people were onboard a boat designed for only 536.

"There was negligence, failures -- that much is known," says Nadine.

Senegal closed the case in 2003 after concluding an investigation that blamed the captain, lost in the catastrophe.

French courts also dismissed a years-long French probe into the case, which had found evidence against seven Senegalese officials, concluding that Paris did not have jurisdiction.

Nadine said that amounted to "killing the victims a second time".

Senegalese and French victims' associations want the raising of the wreck of Le Joola, which sunk to a depth of some 20 metres (60 feet).

An aerial view of the doomed ferry. By HANDOUT (Marine Nationale/AFP/File)

They also want a memorial erected.

One was due to be unveiled in Ziguinchor, where most of the victims were from, in time for Monday's anniversary -- but the site is nowhere near ready.

French victims have long tried unsuccessfully to obtain permission for a memorial gravestone to be placed at Paris' Pere-Lachaise cemetery.

"We shall not abandon our victims... they deserve to be honoured," said Nadine.

She will join commemorations in Senegal, now a "second home", as she has done every year since the disaster except for a period during the pandemic.

"Without them perhaps I wouldn't be here today. I might have chosen just to go to pieces," she reflects, wiping away tears.

A man with deep love for Ghana – Sam George celebrates Maham...
3 minutes ago

Sammy Gyamfi pens heartwarming message to Mahama on his 64th...
22 minutes ago