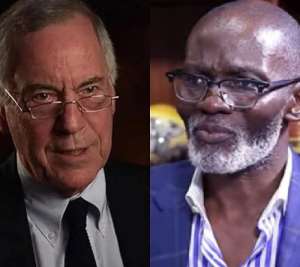 A Professor at the Johns Hopkins University, Steve Hanke has lambasted Gabby Otchere-Darko for asking Ghanaians to applaud the President Akufo-Addo government for putting the ailing economy back on its track.

In a post on social media, the leading member of the ruling New Patriotic Party (NPP) said the government should be praised for how it has handled the Ghanaian economy in these trying times.

“The Akufo-Addo government and, in particular, MoF, deserve the nation’s commendation for their handling of the economy in these most challenging times. Despite slump in revenues, bills are being paid, including salaries, roads being fixed, & money found for programmes like YouStart,” Gabby Otchere-Darko said in a post on Twitter.

In his view, the NPP member and defender of the government must be living on another planet if that's his honest opinion about the ailing economy.

“Leading member of the New Patriotic Party (NPP) Gabby Otchere-Darko says Pres. Akufo-Addo deserves "praise" for his handling of the economy. SPOILER ALERT: Otchere-Darko must be on another planet,” Prof. Hanke shared in a post.

According to him, Ghana’s inflation is continually rising and is currently at a stunning 81%/yr.